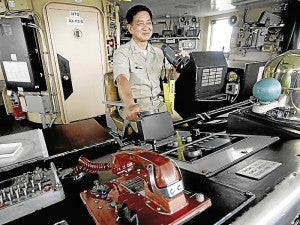 On the two-week voyage across the Pacific, they would ride out the periods of enforced inactivity with videoke showdowns, the song lyrics flashing on a giant flat-screen. On other nights, they would call out numbers at the mess hall in rounds of bingo for token prizes.

But this was no cruise ship carrying Filipinos returning home from a foreign sojourn.

This was the BRP Gregorio del Pilar, the Philippine Navy’s newest and biggest warship, which berthed at its new home port on August 24.

Aboard the former US Coast Guard vessel that used to patrol the freezing Bering Sea off Alaska, the voltage is still 110 but the heater is never turned on.

“This is like our mother ship. It’s the biggest ship that can be used for any role, any mission. As a flagship, this is the Navy’s pride, our [first] modern ship,” said the Del Pilar’s Captain Alberto Cruz.

The 378-foot Hamilton-class cutter, a 46-year-old hand-me-down from the US Coast Guard, is fast shedding its American identity and taking on a distinctly Filipino mien.

There is a crucifix on most every deck, which comes in the form of a nightlight in the captain’s cabin. The clinic—which would be considered state-of-the-art in terms of Philippine naval standards—has an altar on one corner and a small Philippine flag near the door.

The heavy-duty mess hall is still packed with American-made goods, from French Vanilla or Irish Cream coffee creamer to supersized canned foods. But the kitchen churns out typical Filipino dishes like menudo and chop suey. And of course, creamy fruit salad for dessert.

In the hallways and bulletin boards, US Coast Guard posters are still a ubiquitous presence, but beside them are Philippine Navy memos and duty sheets.

Near the mailbox still marked “US Mail,” there’s a flat screen, a microphone and a thick songbook, so singing sailors are sure to never run out of choices while on long missions at sea.

Attesting to how much the ship has been Filipinized, Cruz said the crew that trained in the US to operate the ship before sailing it home had asked that they be sent a videoke machine.

“When we were sailing in the Pacific, we did the videoke and had a singing contest like “American Idol.” We called it “Goryong Idol,” said Cruz.

The Del Pilar was named after Gregorio del Pilar—nicknamed “Goryo”—the flamboyant 22-year-old “boy general” of the Philippine Revolution. Del Pilar was treacherously killed while holding off an entire US battalion with just 60 men at the historic Tirad Pass to facilitate the escape of President Emilio Aguinaldo during the Philippine-American War in 1899.

At 47, Cruz is just a year older than the Del Pilar. But the new Navy warship is already the sixth to be commanded by the captain who completed two prior tours patrolling the waters off Palawan.

The vessel was acquired under the auspices of the country’s Mutual Defense Treaty with the US, which allows the Philippines to acquire decommissioned US defense equipment.

It was transferred to the Philippine Navy through the US Excess Defense Article program, at a transfer cost of P450 million, which was paid out of the Department of Energy’s Malampaya project funds.

Cruz said the ship will soon go into dry dock at a shipyard in Batangas for refurbishing, regular maintenance and minor repairs. It will also be repainted in the Navy’s regulation gray.

In welcoming the new star of the Philippine Navy fleet, President Aquino said the vessel would boost the Philippines’ defense capabilities in the country’s exclusive economic zones, including the disputed waters of the West Philippine Sea.

“When he visited, he was just happy that the ship was here, the latest in the inventory of the Navy,” said Cruz.

“We really need more assets in Palawan, considering there’s a big area to be patrolled. That’s why this is a big help,” he added.

Before it was turned over to the Navy, the Del Pilar’s modern weapons systems were removed and only basic armaments were left on board, according to weapons officer Lieutenant Ronald Paras.

What remains of the ship’s defense system is a deck-mounted 76mm/62-caliber main canon at its fore, flanked on either side by an antimissile system called the MK 36 Super Rapid Bloom Offboard Countermeasures Chaff and Decoy Launching System.

The Del Pilar, until recently the largest class of vessel in the US Coast Guard, is definitely a major boost to the country’s Navy fleet, often derided as a collection of aging World War II-era warships, according to Cruz.

“In terms of equipment, everything you need is here: firefighting, navigation and other tools and, of course, accommodations,” he said. The vessel can accommodate up to 180 crew members.

Powered by gas turbines, a first in the Navy’s diesel-fed fleet, the vessel can reach speeds of 28 knots and stay at sea without refueling for up to a month. It is equipped to quickly deploy troops to pursue enemy vessels through onboard rubber boats.