Aquino back home with $13-B deals 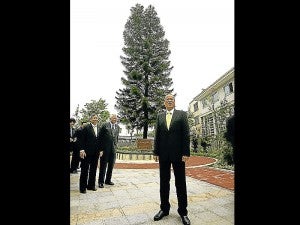 MOM’S TREE. President Aquino on Saturday stands next to the araucaria tree (a variety of evergreen) planted by his mother, the late President Corazon Aquino, during her 1988 visit to Hongjian village in Fujian province, hometown of the Cojuangcos’ Chinese ancestors. Saturday’s visit to Hongjian village, Jiaomei township in Longhai City was the last stop of President Aquino’s five-day China visit. Note the two treetops of nearly equal height which villagers took to mean that another figure from Cory Aquino’s family would rise to power. EDWIN BACASMAS

Mr. Aquino said the 36 meetings he had with Chinese businessmen over the course of his visit had resulted in $1.3 billion in new investments, $3.8 billion in “almost certain” investments and another $7.9 billion worth of possible investments from corporations that have shown interest in the country.

“We succeeded in putting across the message we want to bring: the door of the Philippines is open to investments from China,” Mr. Aquino said in remarks on his arrival at Naia 2 with his  delegation that included many of the country’s most prominent business leaders.

“With our economic managers, we showed them the business opportunities in the Philippines. In agriculture, infrastructure, energy, tourism, the two governments saw the good results of Chinese continuing to look for investment opportunities,” he added.

The President said that 2012 and 2013 have been set as the “Philippines-China Years of Friendly Exchanges.”

“Our visit to China was about building a strong foundation for development: where our goals are clear; and where the two governments will provide the mechanism so that we could increase our trade and tourism within five years,” he said.

During his visit, he said China and the Philippines had signed agreements covering trade, economic and technical cooperation, tourism, media, sports, culture and information.

“This is proof that in many fields, the Philippines and China are in agreement and share the same goals,” he said.

Mr. Aquino said he and Chinese President Hu Jintao were glad that two-way tourist arrivals between the two countries had breached the one-million mark.

Trade target of $60B

“We agreed that we will try to achieve two million tourist arrivals by the year 2016. China and the Philippines will also seek to strengthen our bilateral trade by meeting the target of $60 billion in two-way trade by 2016,” he said.

Mr. Aquino  also said that Beijing and Manila have agreed to peacefully settle the disputes over territories in the West Philippine Sea.

“About the West Philippine Sea, I am excited to tell you that our exchange of ideas with them on how to move forward and agree on differences of the two sides on this issue went well and was meaningful,” the President said.

“And the better news is that our view matched with them on the importance of preserving the peace in this area. They are also ready to cooperate on the implementation of the Asean Declaration of Conduct of Parties in the South China Sea,” he added.

Thanks to Fujian kin

The President also reported about his visit to his ancestors’ Hongjian village in Fujian, where he saw the tree his mother, the late President Corazon Aquino, had planted 23 years ago.

“Many of the ancestors of the Chinese Filipinos who reside in our country came from the province of Fujian and one of these include my family,” Mr. Aquino said.

“We have a saying that those who don’t know where they came from, won’t arrive at where they are going, so I made it a point to visit and give thanks to my relatives in Fujian who also expressed their support for our aim to take the straight path,” he said.

The President said he also visited the Filipino communities in Beijing, Shanghai and Xiamen and was impressed with their contributions to China’s economy.

“Our Filipino workers there and in other parts of China—whether they’re engineers, teachers, media practitioners, musicians—are known for their craft,” Mr. Aquino said.

“They might be in a foreign country but, they wave the blue, red and yellow of our flag with heads held high. This is one of those that strengthened my resolve to improve the governance of this country so that in the future, they will use and share their craft and talents here and with their fellow Filipinos,” he added.

He told the forum, his third in his five-day visit, that Chinese President Hu Jintao, Premier Wen Jiabao and National People’s Congress leader Wu Bangguo had assured him that China would encourage Chinese investments in the Philippines.

He said the discussions with the Chinese leaders showed “a shared commitment to market rules, and a shared interest in agriculture, water conservation, energy distribution and renewable energy generation, infrastructure and tourism as sectors that have great opportunities for mutual cooperation and profit.”

“I encourage all of you to get to know those you are seated with. Perhaps you may even reconnect with a distant relative, or find a potential partner in business. I invite you to get in touch with the Philippine Consulate in Xiamen, as well as the Philippine Trade and Investment Center in Guangzhou,” Mr. Aquino said.

“It is my hope that the spirit of achievement of the past will be demonstrated again: this time, in a new generation of entrepreneurs and corporations from China, who will invest in the Philippines for the benefit of Filipinos and Chinese alike. The journey to success begins with a single step: the one we have taken today,” he said. With a report from Norman Bordadora