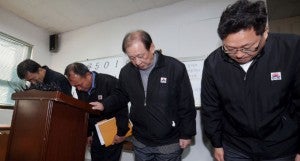 Executives of Sajo Industries bow to families of the missing fishermen of the South Korean fishing boat Oryong 501, which sank in the western Bering Sea on Dec. 1, during a briefing session at the company’s branch office in Busan, South Korea, Wednesday, Dec. 3, 2014. AP/Yonhap, Kim Sun-ho

SAN FRANCISCO — Two more Filipino crewmen have been confirmed dead following the sinking of Korean vessel Oryong 96 off the Bering Sea in Russia, raising the total number of Filipino fatalities to five, the Department of Foreign Affairs said December 11.

Only seven survived the sea tragedy – three Filipinos, three Indonesians and one Russian.

Foreign Affairs spokesman Charles Jose said the three survivors and the remains of the victims will be transported to Busan, South Korea.

Jose said Russian vessel Odin will leave for Busan on Dec. 12 and is expected to arrive there on Dec. 22. The ship will make short call fat Vladivostok to undergo necessary Russian government documentation.

Upon reaching Busan, Jose said the Filipinos will undergo medical exam and their statements will be obtained as part of a marine investigation procedure.

“Our embassy in Seoul will send a representative to Busan upon arrival to assist the survivors and attend to the expeditious repatriation of the deceased,” Jose said.

The principal shipping agency, he added, will be responsible for all the needs of the survivors, as well as the repatriation requirements of the remains of the deceased to the Philippines.

Search and retrieval operations, meanwhile, will continue in cooperation with the United States, Russia and South Korea, Jose said.