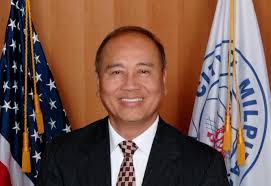 MILPITAS, California — Filipino American Jose Esteves was sworn in Tuesday, December 2, at Milpitas City Hall as mayor-elect of this city at the heart of Silicon Valley.

The ceremony marks the start of his sixth mayoral term in Milpitas; he was first elected to the post in 2002.

In his address to his constituents, Esteves, a native of Dagupan City, Pangasinan (Philippines), thanked city residents for their continued support and said, “You want nothing but the best–to live in a top-rated city, and that is Milpitas. This is my goal as your public servant. I will continue to live up to your high expectations. You deserve this extraordinary city, and my plan is to lead in this endeavor.”

Garry Barbadillo, also a Filipino American, and Marsha Grilli were sworn in as new members of the city council after winning in the November 4 elections. Incumbent council members are Debbie Giordano and Carmen Montano.

Esteves served as city volunteer and commission member before being elected to the city council for the first time in 1998. He has not missed a single council session since then.

Esteves graduated from the University of the Philippines (Diliman, Quezon City) with bachelor’s degrees in civil engineering and industrial engineering, and a master’s in business administration, to boot. He was also a graduate of Communicating for High Impact Academy, Anderson Graduate School of Management-UCLA and of ‘Leadership in the 21st Century,’ JFK School of Government-Harvard University.

Esteves, 67, is married to Susan, a successful businesswoman. They are proud parents of Irene, a member of the National Honor Society and the California Scholarship Foundation.

Read Next
San Francisco readies $1.1M for local roll out of immigration order
EDITORS' PICK
Mass testing on April 14; but who to test is unclear
Cash aid trickles down to cities meeting DSWD requirements
US urges masks as dramatic steps to combat virus roll out
Rights groups wary as NBI summons 17 for ‘fake news’
Quick chat with Nicole Andersson: ‘You really don’t need much to be happy’
Quest for COVID-19 cure: PGH needs blood samples from recovered patients
MOST READ
Angelica Panganiban on endorsing Duterte in 2016: ‘Patawarin niyo ko’
PACC to NBI: Probe Robredo for ‘competing with national govt’ in fight vs COVID-19
PACC’s COVID-19 motto? ‘Lahat ng tutulong, ikukulong’ — Lacson
5 Filipinos on Forbes Asia’s “30 Under 30” roster
Don't miss out on the latest news and information.