Humanity as the eye and I of the storm

NEW YORK CITY — Even as I write this, Typhoon Hagupit has just made its fourth landfall, this time targeting Batangas, after churning through the Visayas and the Bicol region. It first touched Philippine soil at the aptly named Dolores. Dolorous indeed have been the lives of those who live at the mouth of the typhoon corrida. While its status has been downgraded from the category of super typhoon, that is little consolation to the families of the 21 fatalities and the estimated million evacuees. Still, there is some solace to be had in the fact that Hagupit didn’t match Typhoon Yolanda’s outsized fury a little more than a year ago. Hagupit did however make memories of that historic landfall, with record-breaking velocity and storm surges, and at least 6,000 deaths, ever more vivid and from some accounts re-traumatized many Yolanda survivors.

By most accounts recovery efforts have been frustratingly slow, a long uphill battle. Stories of corruption and inefficiency abound, mixed in with narratives of resiliency and rehabilitation undertaken by the nonprofit sector, which theoretically should include the government, although to do so would be to beggar reality. Yolanda was seen then as a portent of other brutal storms to come—one of the inevitable and lamented legacies of climate change—and Hagupit seems to have emerged right on cue. 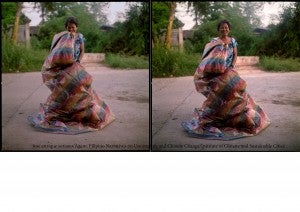 There has been another sort of commemoration, less concerned with the larger if rather detached picture of the unwelcome changes in Mother Nature, and more focused on the individuals who were right in the path of Yolanda. I refer to Agam: Filipino Narratives on Uncertainty and Climate Change, a book just published by the Philippine-based Institute for Climate and Sustainable Cities (www.ejeepney.org) “Agam” is a Tagalog word, meaning uncertainty, ambiguity, as well as meditation and reflection. According to the Introduction by Renato Redentor Constantino, ICSC’s executive director, it “also means a memory of the past, and the ability to think.” (If his name rings a bell, that is because this Renato is the grandson of the late Renato Constantino, the well-known leftist nationalist historian and author of several well-regarded books, including The Philippines: A Continuing Past and The Miseducation of the Filipino.) Definitely not a coffee table book (though its size nearly approximates it) and meant to be actually read, Agam is an anthology, made up of a series of photographs of Yolanda survivors, by Jose Enrique Soriano, and accompanying texts, by 24 poets and prose writers, almost all of them based in the Philippines.

Each of the contributing writers was sent one photo and asked to observe three rules: the length could not exceed a thousand words; the jargon of climate change was to be avoided at all costs; and, perhaps most importantly, the written text could not simply be a caption. The photo was to be used as a prompt, a catalyst, for a more personal and vivid imagining of the writer’s response to Yolanda. The languages in the book range from Tagalog and English to Ilocano and Waray, from Sama and Bicolano to Cebuano and Maguindanao, with English translations provided where needed.

Agam is aimed at restoring the survivors as the locus and centerpiece of the continuing narrative(s) around Yolanda. And it succeeds admirably. Facts, statistics, demographic predictions, scientific charts—these are all very well and good, and unquestionably important, but lack the emotional pull that draws the reader in. Unless stories and poems are wrought that make us feel viscerally the maelstrom of emotions and events brought about by the storm, then Yolanda remains a terrifying notion but mostly in the abstract. More than that, even as depressing as the context to these texts may be, the very fact of their existence, of their being written and read, implies continuity, of hope and humanity. This is a way of saying, we will bend with the wind but with grace, humor and fortitude. We will survive.

Here is a sampling of the texts:

Proceeds from book sales will benefit Re-Charge Tacloban, described in the book as “an integrated solar and sustainable transport services and learning facility in Tacloban.” Agam is the perfect complement to Verses Typhoon Yolanda: A Storm of Filipino Poets, published earlier this year by the California-based Meritage Press and edited by the press’ founder and editor, Eileen R. Tabios. As I first noted in my column earlier this year, “This anthology reflects a multitude of views—emotional, intellectual, political, ecological, all of the above—held by 133 Filipino poets living in various parts of the global Filipino diaspora. (Full disclosure: I am one of the poets included.) The book is indeed a storm, as the title indicates, but a storm that seeks to heal rather than wound, that builds rather than destroys, that raises the solid shelter of hope against the winds of cynicism and despair. “ Book sales from VTY will also go to typhoon relief. For more information, go to http://versestyphoonyolanda.blogspot.com which also includes information on recipients of the relief funds the book has generated.

Reader, get thee hence and purchase these noteworthy books!