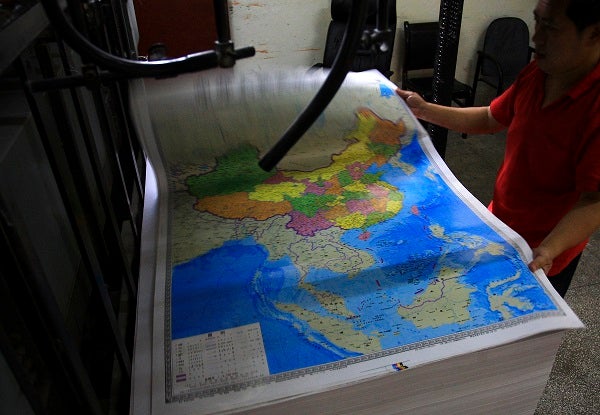 In this June 27, 2014 photo, a printing worker holds a new officially approved map of China that includes the islands and maritime area that Beijing claims in the South China Sea, at a factory in Changsha in south China’s Hunan province. China has again rejected an attempt by the Philippines to challenge its territorial claims over the South China Sea through international arbitration, releasing a lengthy paper a week before the Dec. 15, 2014 deadline for China to respond to the case. China prefers to settle its disputes with discussions with the countries directly involved. But the Philippines has filed a case with an international tribunal. AP

BEIJING — China on Sunday again rejected an attempt by the Philippines to challenge its vast territorial claims over the South China Sea through international arbitration, a week before a deadline for Beijing to respond to the case.

China prefers to settle its disputes in discussions with the countries directly involved. However, after China took control of a disputed shoal following a naval standoff with the Philippines near its coastline, Manila filed a case early last year with a tribunal operating under the UN Convention of the Law of the Sea. It provides a regulatory framework for the use of the world’s seas and oceans.

Xu Hong, director general of the Foreign Ministry’s Department of Treaty and Law, said the Philippines was “obstinately pushing forward arbitration procedures” and urged it to negotiate with Beijing instead. He told reporters that China was committed to rejecting and not participating in the arbitration proceedings.

However the arbitration works, “it won’t change the history or the facts of China’s sovereignty over the South China Sea islands as well as the adjacent waters,” Xu said.
The document released Sunday elaborates on China’s previous arguments that territorial sovereignty is beyond the scope of the tribunal. It said China’s rejection of arbitration is in line with international law and that China and the Philippines have previously agreed to settle territorial disputes through negotiations.

The department has previously said arbitration would lead to a “more durable” and rules-based solution to the long-simmering territorial disputes.

The Philippines is questioning the legality of China’s “nine-dash line,” a rough demarcation of China’s territory on its official maps that virtually envelopes most of the South China Sea, including areas that other Asian nations also claim.

The tribunal has invited China to respond by Dec. 15. Xu said the publication of the paper was not linked to the deadline but had simply taken time to draw up.