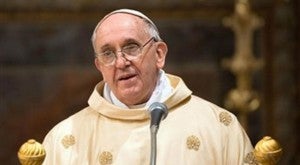 MANILA, Philippines—The Vatican has lauded the Filipinos’ “faith-inspired activities” to ensure spiritual readiness for the visit of Pope Francis in January.

“Officials in Rome were surprised to find that the Philippines is doing preparations aimed at developing spirituality and faith. They claim it is the first time a country that will be visited by a Pope has something like this,” said Tagle, as quoted in an article posted on Papalvisit.ph, the official website for the papal visit.

These “faith-inspired activities” include the recollection for journalists and papal visit committee members held at the University of Santo Tomas on Dec. 3.

The Archbishop of Manila said, however, that cultivating faith should continue even after the spiritual activities.

Vergara said the faithful should prepare for a “unique, special and varied” encounter during the Pope’s visit that mirrors God in the person of the Holy Father.

“This is an opportune time to also realize that Pope Francis is the Vicar of Christ on earth. [The Pope’s] visit can be seen as the visit of God to each of us,” Vergara said during the recollection.

At the Vatican, Filipino priests are holding a prayer vigil after hearing the news of another strong typhoon that was about to hit the country, according to Borongan Bishop Crispin Varquez.

Varquez made the statement in a homily hours before the expected landfall of Typhoon “Ruby” (international name: Hagupit) in Eastern Visayas yesterday evening.

“God is one with us during this time of pain,” he said.

In his homily delivered in Waray, Varquez appealed to the residents to be “thoughtful” of each other during disasters such as this even as he appealed to local business owners not to take advantage of the typhoon by raising the prices of basic commodities.

Varquez celebrated a special Mass on Saturday morning at the Bishop’s residence here, where at least 132 families (722 people) had been seeking shelter from the storm since Friday evening.

The evacuees, mostly the women, settled on the cartons and mattresses as they prayed for safety.

Heavy rains began pounding Eastern Samar before noon on Saturday. In Barangay B, a coastal village here, waves were seen rising to nearly 2 meters. Power supply was also interrupted in this city and in the municipality of Dolores.

In Dolores town, residents from Barangay Buenavista on Friday buried Basilio Sumook, a man in his 70s, before fleeing to the evacuation center at Dolores Central Elementary School.

In an interview after the Mass, Varquez expressed confidence that the scheduled visit of Pope Francis next month will push through, even after the disasters that struck the country.

The Pope is scheduled to visit Tacloban City in Leyte, which was hardest hit by Supertyphoon “Yolanda” in November 2013.

Rev. Neil Tenefrancia, the diocese’s communications officer, said he was in constant communication, through social media, with the Filipino priests in Vatican City, who told him that a prayer vigil was in progress.

“What he (the Pope) would see (during the visit to the Philippines) is something fresh from a typhoon,” Tenefrancia said.