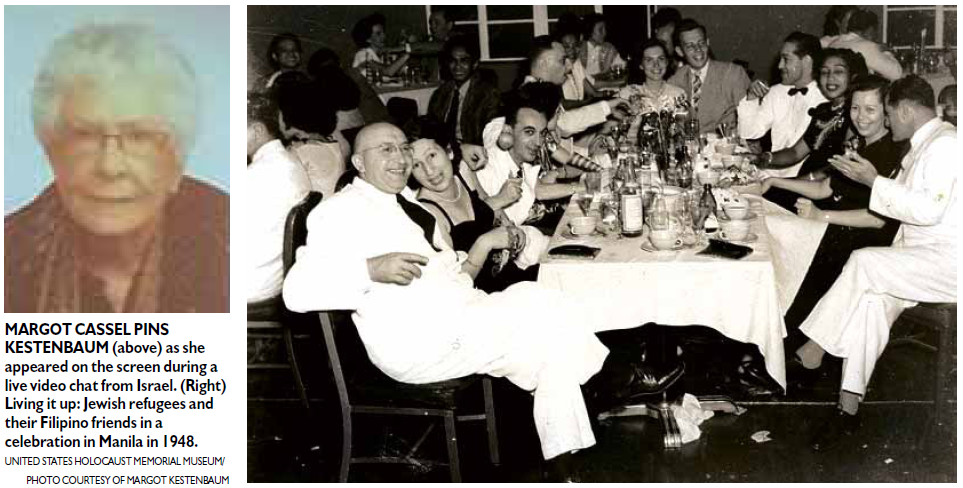 Margaret Cassel sings “Bahay Kubo” (Nipa Hut) with such verve and high spirits that no one would suspect she learned the lively Filipino tune during a dark period of her life.

Cassel, 83, and her family were part of a group of 1,300 Polish Jews who escaped persecution in Germany in 1938 by fleeing to the Philippines where they were welcomed by then Commonwealth President Manuel Quezon.

She was only 7 years old when she arrived here, but her memory of her life here and the things, including the Filipino songs, that she learned as a child growing up in the Philippines before and during World War II remains vivid.

It was with “Bahay Kubo” that Cassel introduced herself to students at Philippine Women’s University (PWU) in Manila during a recent live video chat from Israel to tell her story of her life as a PWU grade school student.

Before asking Cassel to tell her story, Israeli Ambassador to the Philippines Effie Ben Matityau spoke, thanking the Philippines, and particularly Quezon, for providing refuge to the Jewish people during the “darkest days in human history.”

The Israeli ambassador said the Jewish people in Europe had difficulty finding refuge until Quezon’s offer for them to come to the Philippines, describing it as “a remote place in the world and unexpected.”

“Manuel Quezon led with conviction and that earned him and his nation the highest moral ground and great moral victory. That earned the [country] the thanks of a grateful Jewish people and should make the Philippines a proud nation before the family of nations,” he said.

Speaking to the students from Israel, Cassel said 1,300 Jews were saved by Quezon’s open-door policy, which she said was a “political idea” but, for her, was more of an “open-heart policy.”

“The open heart you gave us, that was far beyond politics,” she said.

She said she hoped telling about her memories of the Philippines would show how much the country “gave us acceptance, love, respect and restored the dignity that Nazi Germany tried to take from us.”

She spoke of her Filipino teachers like PWU principal Naty Osorio who saw to it that they learned waltzes like the “Merry Widow” “so we could feel [our] home” and know that “we had a culture.”

Cassel and her cousin Lotte studied at PWU. She stayed at the school from Grades 3 to 7. She went to the United States after graduating in 1944.

She said it was also Osorio who taught them the idea of democracy, noting how the principal allowed a third-grade student to take part in the election of a delegate to the student council.

“That is teaching democracy at an early age,” she marveled. “We made decisions on how often and who cleans the yards.”

Cassel asked the students if they knew another Filipino song, humming the melody and the first few lyrics of what turned out to be “Sampaguita.”

She recalled how much she liked recess because it was when the “open-heart policy went to the students.”

“Here we were, two students (her cousin Lotte and she) looking different … and what did [we] learn? They taught us piko (hopscotch),” she said.

At one point, she also asked the students whether they knew how to play a game of jackstones, which she said she had learned to play at PWU.

Cassel also said she preferred to wear bakya (wooden sandals) in school, like her Filipino classmates, rather than the shoes she brought from home.

Asked whether she had any favorite Filipino food, Cassel said she loved green mangoes with bagoong (shrimp paste). She said she also loved lanzones and santol.

Cassel said she learned the Filipino alphabet, the Abakada, which she has unfortunately forgotten.

“It got lost because I learned Spanish and Hebrew, and so I’m very confused,” she said.

“He was man enough and courageous to show what was really happening in his novels,” she said of Rizal, who wrote the novels “Noli Me Tangere” and “El Filibusterismo,” depicting the oppressive life of Filipinos under Spanish colonial rule.

Cassel said the PWU was closed during her fourth grade when the Japanese Army invaded the Philippines. The school eventually reopened in an old building. They were taught gardening and how to weave baskets and were made to learn the Japanese language and songs.

Cassel also recalled that during the Japanese time, their house burned down.

“My father and I managed to come out but they would not let my mother come out,” she said. She started to scream “mother” in Japanese and that was when the Japanese soldiers allowed her mother to leave the burning house.

Asked what life lessons she learned from her school days at PWU, she said it was the “idea of learning to accept others.”

“It’s an important lesson that I carried and was given to me and I could give in return,” she said.

Years after leaving the Philippines, Cassel went to Africa to help poor women who lived in the streets. She taught them to earn money for themselves so they would be able to “keep that dignity,” she said.

Cassel said she had no idea of what was in store for them when her family came to the Philippines.

When her family told relatives that they were going to the Philippines, she said some of them said they were “going to a country where elephants and tigers are walking in the streets.”

“They knew less than nothing,” she said.

“Today the world is smaller and because of communications, many know much more of the Philippine islands,” she said.

Cassel announced that she planned to visit the Philippines next February, drawing applause from the students and school authorities.

“Manila, as I remember it as a little girl, was beautiful, marked with green lawns. The middle of Taft Avenue was a green island with trees and flowering shrubs,” she said.

Philippines: A Jewish refuge from the Holocaust