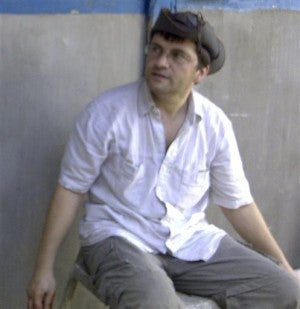 This Jan. 29, 2012 file photo, released by the Tawi-Tawi Provincial Police Office, shows Swiss Lorenzo Vinciguerra at an undisclosed place in the southernmost island province of Tawi-Tawi in the Philippines before heading out to a mountain forest to take pictures of the rare Sulu hornbill. Vinciguerra was one of two European bird watchers seized by the militants in nearby Tawi Tawi province in February 2012. The Swiss hostage, escaped Saturday, Dec. 5, 2014, from Abu Sayyaf extremists after hacking one militant commander and getting shot as he dashed to freedom, ending more than two years of jungle captivity in the restive southern Philippines, security officials said. (AP Photo/Tawi-Tawi Police Provincial Office, File)

MANILA, Philippines— A Swiss hostage escaped Saturday from Abu Sayyaf extremists after hacking one militant commander and getting shot as he dashed to freedom, ending more than two years of jungle captivity in the restive southern Philippines, security officials said.

Lorenzo Vinciguerra, 49, made his daring escape after government forces fired artillery rounds in the jungle camp where he was being held near mountainous Patikul town in Sulu province. He hacked an Abu Sayyaf commander and ran away but was shot and wounded by other militants, security officials said.

Philippine army scout rangers later found him and brought him to safety.

“He was wounded but he’s well and recovering in a hospital,” regional military commander Lt. Gen. Rustico Guerrero told The Associated Press by telephone.

Vinciguerra was one of two European bird watchers seized by the militants in nearby Tawi Tawi province in February 2012. It was not immediately clear what happened to the other hostage, a Dutchman.

A Filipino guide who was with them had jumped into the sea and escaped while the militants were taking them by boat from Tawi Tawi to Jolo island in Sulu, an impoverished, predominantly Muslim province where the Abu Sayyaf has endured years of US-backed backed military offensives.

The Abu Sayyaf was founded in the early 1990s on Basilan island, near Jolo. With an unwieldy collective of Islamic preachers and outlaws, it vowed to wage jihad, or holy war, in the predominantly Roman Catholic nation, but lost its key leaders early in combat, sending it on a violent path of extremism and criminality.

Washington has listed the Abu Sayyaf as a terrorist group and blames it for deadly attacks on American troops, foreign missionaries and tourists and civilians in the south.

The al-Qaida-inspired group still has an estimated 400 fighters split into about six factions. The mostly armed farmers still hold several hostages, including a Malaysian police officer and a Japanese treasure hunter.

Although weakened by battle setbacks, the militants have survived largely thanks to money collected from ransom kidnappings and extortion.

The military recently launched a new offensive against the militants after a new bout of kidnappings, including Chinese tourists in neighboring Malaysia’s Sabah state, which is only hours away by speedboat from the southern Philippines.