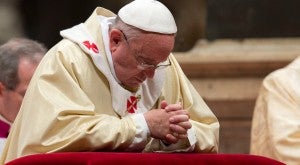 BORONGAN, Eastern Samar — Pope Francis is worried about the Philippines, the country he is scheduled to visit next month, as it faces a strong typhoon.

Borongan Bishop Crispin Varquez said Pope Francis has heard about the typhoon “Ruby” and the fact that the province of Eastern Visayas is again in a storm’s path.

A vigil at St. Peter’s Basilica in the Vatican is also being held by the bishops as they worry about the fate of Eastern Samar, he added.

“He (the pope) is worried,” Varquez said in Waray in his homily during a special mass held at the bishop’s residence, which currently caters to 132 families or 722 individuals.

Varquez officiated the mass on the fourth-floor of the four-storey building as evacuees sat on mats and mattresses, hours before the expected landfall of typhoon.

In his homily, Varquez appealed to everyone to be “thoughtful” of other people during trying times.  He also appealed to business owners not to take advantage of the disaster to justify the increase in prices of basic commodities.

Read Next
AI torture report prompts Senate probe
EDITORS' PICK
IATF: Food firms to operate with 50% of workforce during Luzon quarantine
BREAKING: 1,075 people in PH has coronavirus disease – DOH
Style and music journeys with Claudia Barretto
UP-PGH wards for COVID-19 patients finished in 5 days
Cebu City closes its borders
DILG to stranded workers: ‘Stay where you are’ until Luzon-wide quarantine is over
MOST READ
Tootsy Angara bares neighbor wanted them out of village
593 health volunteers sign up to fight COVID-19, says DOH
UP-PGH wards for COVID-19 patients finished in 5 days
No more bread? Company forced to limit production
Don't miss out on the latest news and information.