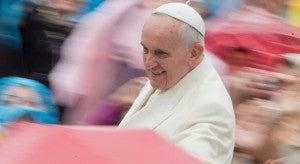 CEBU CITY, Philippines—A young man lost four of his kin. A woman almost died when her house collapsed. Two women lost an arm each. Another woman was mourning the death of a son.

These five individuals suffered greatly when the earth shook for 33 seconds at 8:12 a.m. on Oct. 15, 2013, in Bohol at a magnitude of 7.2. The earthquake was the strongest to hit the province in recent years.

Next year, the five will be among those to be comforted by Pope Francis during his visit to Palo town in Leyte province.

They are among the 30 lucky people who have been given the privilege of joining Pope Francis for lunch at the Archbishop’s Residence in Palo on Jan. 17, 2015.

Five will come from northern Cebu while the 20 others will be from Eastern Visayas, all survivors of Supertyphoon “Yolanda” that devastated the region on Nov. 8, 2013.

Fr. Victor Warli Salise Jr., director of the Social Action Center of the Diocese of Tagbilaran, told the Philippine Daily Inquirer that the five earthquake survivors came from the hardest-hit towns in Bohol.

The brief description provided by the diocese showed the ordeal suffered by the five during the earthquake, which killed 201 persons and displaced 95,884 families in Bohol.

Barace, a pre-college seminarian, is the lone survivor from a family of five in Antequera town.

Four of his family members died during the earthquake after their house collapsed. He too was wounded. After the tragedy, Barace entered the seminary.

Gentallan almost died when their house collapsed in Barangay San Roque of Maribojoc town. She suffered a head injury and was brought to Cebu to undergo an operation. Her recovery was said to be a “miracle.”

Bongay lost her right arm after a concrete slab fell on her as her house in Loon town collapsed.

Israel also lost his right hand after the earthquake.

Flores, 53 and a resident of Barangay Poblacion in Sagbayan town, lost her son.

Fr. Agerio Paña, chancellor of the Diocese of Tagbilaran, told the Inquirer in a phone interview that the five were selected by a committee formed by Bishop Leonardo Medroso to spearhead the selection process.

“They come from heavily devastated parishes in the diocese,” he said.

Father Salise said the five Boholanos would have nothing to worry about the cost because the diocese would shoulder the travel expenses in going to Palo to meet the Pope.