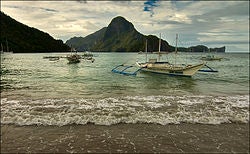 PUERTO PRINCESA CITY, Philippines – El Nido police are searching for a missing Taiwanese national believed to have been lost on Tuesday afternoon while swimming across the public beach near the town proper.

Chang was reported missing by her companion, also a Taiwanese and a tourist, while they were swimming in an area near Sitio Calitang, Barangay (village) Bucana at 4 p.m.

The report indicated that the two foreign nationals were swimming just off the beach near the shore when the victim got lost.

Gomez said municipal authorities have begun a “search and rescue” operation for the missing Taiwanese national.

Gomez said the town police have found no other witness so far to the disappearance of the Taiwanese. Her companion told police there was no sign of distress from the victim before she disappeared.

El Nido, located some 200 kilometers north of Puerto Princesa City, is one of the main tourist destinations in Palawan, attracting hundreds of local and foreign tourists daily.