SolGen: Not sure of US defense of PH vs China | Global News
Close
menu
search

SolGen: Not sure of US defense of PH vs China 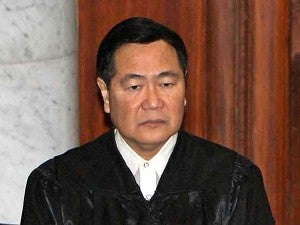 MANILA, Philippines–There is no guarantee that the United States would come to the aid of the Philippines in case of an external attack despite the long-standing defense partnership signed through several agreements between the two countries.

Associate Justice Antonio Carpio emphasized this on Tuesday and got the government side to concede this point when he grilled acting Solicitor General Florin Hilbay on the second round of oral arguments on the Enhanced Defense Cooperation Agreement (Edca).

“I just want you to understand [that] even if we declare Edca constitutional, it does not mean the US will defend us, because there is no such guarantee,” Carpio told Hilbay.

Carpio, a staunch defender of Philippine sovereignty as reflected in his position on the country’s maritime dispute with China, drew several scenarios of the country coming under attack.

He asked Hilbay of the potential US response given its partnership with the Philippines, including Edca and its mother agreement, the Mutual Defense Treaty (MDT).

Malacañang has been defending Edca as a vital instrument in assuring the country’s security in the face of external threats amid the unresolved maritime dispute with China in the West Philippine Sea.

It has repeatedly said the agreement implemented provisions already approved under standing Philippine treaties with the United States: the MDT and the Visiting Forces Agreement (VFA).

The Philippines and the United States, while pursuing a strategic defense pivot to the Asia-Pacific region, signed Edca in April, just before the state visit of US President Barack Obama.

The agreement allows US troops to gain greater access to Philippine military camps and bases, to put up facilities and to store defense materiel.

Petitioners against Edca asked the high court to declare the pact unconstitutional for alleged violations of constitutional provisions that barred nuclear weapons and the establishment of foreign military bases in the country without Senate approval.

Those seeking Edca’s nullification include former Senators Rene Saguisag and Wigberto Tañada (among 12 senators who voted to kick US military bases out of the country in 1991), activists, lawyers, religious leaders and members of the academe.

During his turn to interpellate, Carpio asked Hilbay a string of questions: Would the Americans come to our aid if we invoke the MDT? What if China seizes one of our islands?

To which the latter responded: “There is no guarantee about the future. What is important [is that] it entangles the US in the interest of the Philippines. That is good.”

Hilbay agreed with Carpio that the Philippines should be self-reliant in its external defense efforts. And while alliances could be tapped, there is no certainty of aid, Hilbay said.

“We need to depend on ourselves. We have to rely on ourselves, but nothing prevents us from taking advantage of our alliances. But there is no guarantee at all,” the solicitor general said.

He, however, clarified that he could not speak for the United States nor predict what the partner nation would do: “I am here to defend a particular agreement.”

Hilbay said “Edca will not save our country from all our problems,” but added that “it might be part of a whole range of responses” the government could mount to prepare for threats.

Asked what value the pact held when it could not guarantee US intervention, Hilbay said Edca would help the Philippines improve its military facilities.

He reiterated President Aquino’s duty to protect the country: “The President here is doing something. Let us help him. The cost of doing nothing is incalculable.”

In his opening statement, Hilbay also cautioned the high court against referring Edca to the Senate, as several justices had expressed during the first round of oral arguments last week.

He said the court may not refer the agreement to the legislature “without first declaring Edca unconstitutional” and “without authority from the President.”

Hilbay said a court-ordered referral to the Senate “diminishes the powers of the President” and “will result in an international embarrassment for the President as sole organ of foreign affairs.”

“Referral to the Senate is plain and simple delay. The potential damage of such delay to our national security is incalculable,” Hilbay said.

Associate Justice Teresita de Castro later brought this matter up with Hilbay and asked if he was warning the high court of a constitutional crisis.

“Not necessarily. A fact is that no member of the Senate is before us saying that the Senate’s prerogative is being diminished,” Hilbay said.

During the nearly four-hour oral arguments yesterday, justices questioned Hilbay on the parameters of the agreement, including the level of access to Philippine military facilities that would be granted the United States under

Chief Justice Maria Lourdes Sereno also directed Hilbay to include a flow chart of the consent mechanism that the Philippines would employ in the implementation of Edca, under which the United States would need the host country’s permission for the use of its facilities.

The high court gave both petitioners and respondents 20 days to file their memoranda, after which the case would be considered submitted for resolution.

Associate Justices Arturo Brion and Estela Perlas-Bernabe were absent from the oral arguments as they were on leave. Associate Justice Francis Jardeleza just observed the proceedings from the audience, inhibiting himself due to his prior involvement in the case being Hilbay’s predecessor as solicitor general.