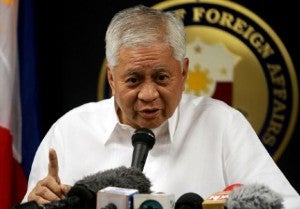 MANILA, Philippines–The Philippines announced Tuesday it had protested China’s reclamation activities in disputed waters, a day after Beijing denounced as “irresponsible” US criticism of Beijing’s construction of an artificial island reportedly large enough for an airstrip.

Foreign Secretary Albert del Rosario said that his department submitted a note verbale to China on Oct. 10, “protesting the activity” in the West Philippine Sea.

“We looked at our records and discovered that a note verbale had already been sent,” Del Rosario said.

Days after the report, Lt. Col. Jeffrey Pool, a US military spokesman, called on China and other governments to cease such construction.

Reiterating Washington’s stance, a US state department spokesperson on Monday said “large-scale construction… would seem to complicate or escalate the situation in our view.”

“The Chinese government can speak for themselves, but we would urge China as well as all the claimants of the South China Sea to be transparent about their activities in disputed areas,” Jeffrey Rathke told reporters.

“External forces have no right to make irresponsible remarks,” China’s foreign ministry spokesperson Hua Chunying said at a briefing in Beijing on Monday when asked about Washington’s comments.

“The construction activities China is undertaking are for the improvement of the working and living conditions of the island-stationed personnel, so that they can better fulfill their international obligations and responsibilities in search and rescue.”

A London-based security group, IHS Jane’s, last week revealed in a report new details of the land reclamation project China was undertaking on Fiery Cross Reef, known as Yongshu in Chinese and Kagitingan Reef in the Philippines.

According to the report, the artificial island is 3,000 meters long and 200-300 meters wide, one of several reclamation projects being pursued by China in the region but apparently the first that could accommodate an airstrip. A harbor has been dug out on the east side of the reef that appears large enough for tankers and naval warships, it said.

“The US is obviously biased considering that the Philippines, Malaysia, Vietnam have already set up military facilities,” Luo was quoted as saying.

In a separate editorial, the newspaper contended that China was building on the reef “mainly to improve the living standards of the reef-stationed soldiers.”

IHS Jane’s said the new island could be China’s first military airstrip in the Spratly Islands and might be aimed at helping Beijing impose its sovereignty claims over neighboring countries that also claim the territory.

‘To coerce other claimants’

“This facility appears purpose-built to coerce other claimants into relinquishing their claims and possessions, or at least provide China with a much stronger negotiating position if talks over the dispute were ever held,” the report said.

Tensions have been rising as Beijing has grown more assertive about its claim on the South China Sea, which is also crisscrossed by shipping routes. Its deployment of an oil rig near the Paracel Islands triggered a bitter standoff with Vietnam, where a wave of anti-China riots broke out in May, killing at least one Chinese worker.

In August, US Secretary of State John Kerry proposed that all countries with competing claims halt any provocative actions, such as land reclamation, but China rejected the suggestion and said the tensions were being overblown.

Beijing claims nearly all of the resource-rich South China Sea, while Brunei, Malaysia, the Philippines, Taiwan and Vietnam have their own claims, several of them also building structures on reefs or occupying islands.–Reports from Leila B. Salaverria, AP and AFP