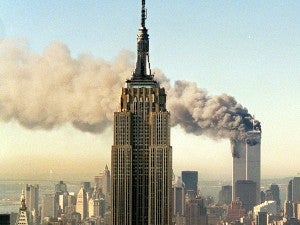 Ten Filipino American community organizations have come together to commemorate the tenth anniversary of 9/11.  There were 18 victims of Filipino descent who died in the “Twin Towers” of the World Trade Center, and two Filipinos were on two of the planes that crashed into the towers on that tragic day.

One of those who passed away on that day was Hector Tamayo, a project engineer who worked in the South Tower of the World Trade Center.  He was survived by his wife, Evelyn, and his two children, Ian, and Pamela, who were 19 and 16 at the time.  Ten years later, Ian is currently a student completing a degree in journalism at New York University, while Pamela is a graphic designer for a major corporation.

According to his New York Times biography, Hector was remembered by his family as “a happy person who loved jokes, his family and, of course, to sing.”

His biography, along with the other 19 victims, will be read at a 9/11 Tenth Anniversary Vigil for Filipino American Families, which will be held on Friday, September 9th, 2011, from 7-9pm at the Asian American Writers Workshop (110-112 West 27th Street, Sixth Floor, New York, NY 10001).  The event is expected to include performances from local Filipino American community artists and personal tributes from families of 9/11 victims. It is open to the public.

Dr. Kevin Nadal, one of the organizers of the event, says that he hopes that vigil will help to bring the Filipino American community together and to bring peace to families who lost their loved ones on that day.

“By coming together as a community, it is important for us to remember the lives that were lost on that day and to pay tribute to them,” Nadal writes in an invitation letter to the families of 9/11 victims. “We must also remember and honor the 17 Filipino and Filipino Americans who we lost. Many of them immigrated to this country in search of a better life. Many of them were young professionals who were just getting their lives started. All of them left friends and family behind.”

The event is being sponsored by 10 Filipino American community organizations, including

Read Next
Bridging the river of change: Succeeding economically in the 21st Century
EDITORS' PICK
Isko Moreno has no problem making his SALN public if elected president
Rise to perfection: Spot on tiles for your stair risers
Step up your vlog game with vivo’s newest smartphone
PNP checks all presidential candidates in search of the ‘most corrupt’ bet
COA special audit on Pharmally deals being finalized; report out by March
DOH reports three more fatalities due to Omicron variant
MOST READ
Billionaire Manny Villar to become next media tycoon after taking over ABS-CBN frequencies
House panel recommends charges vs Duque, Domingo over COVID response
Marcos Sr. on Marcos Jr.
Jam Magno permanently suspended on Twitter
Don't miss out on the latest news and information.