Bridging the river of change: Succeeding economically in the 21st Century 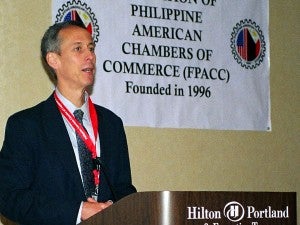 PORTLAND, Oregon—The Federation of Filipino American Chambers of Commerce (FPACC) pulled all the stops to give attendees of their Bi-national Convention a full agenda on how to succeed in these challenging times. Held at the Hilton Portland on August 18-21, 2011, the event was hosted by the Philippine American Chamber of Commerce of Oregon (PACCO) whose president Jaime Lim is also the current president of FPACC.

The four-day event started with “A Green Tour of Portland” highlighting businesses with successful sustainability practices beginning with the Rose Garden Arena of the Portland Trail Blazers. At their facility, it is not all basketball. Reducing their carbon footprint is a primary consideration in running the coliseum. Their programs run parallel to the city’s recycling projects which is not limited to garbage; but also renovating old structures into outstanding facilities. Their Pearl District is a prime example of how an aging and dying downtown area was turned around into a vibrant and economically sustainable section of the city. Some multi-functional condominiums had solar panels, and one even had windmills on its rooftop.

The convention was opened by Philippine Consul General of San Francisco, Hon. Marciano Paynor, Jr. and FPACC President Emerita, Dr. Yolanda Ortega Stern.” It was followed by sessions on “Tools of Entrepreneurship” or “tools of the trade” handy nuggets of information to navigate the tricky economic  landscape we are in today.

Speakers like Kaydel Marshall, Senior Stakeholder Liaison of the IRS, gave out information about tax incentives and credits for small businesses, aside from a calendar with specific dates relevant to IRS filings. The City of Portland, represented by Pete Chism, Sustainability Advisor, gave effective sustainability practices as well as multiple green approaches for a successful sustainable business. Sunun Setboonsarng, a Global Trade Specialist for Business, Innovation and Trade Development Division of Business Oregon presented ways of finding products and services from Oregon that can be exported to other countries, and vise versa.

The sessions were all very informative including how to use media effectively, working with government officials, organizational development and communications tools, travel and tourism, career building, estate planning, health and wellness to name a few. It was clear the organizers walk the talk. They tapped private and government agencies to give attendees relevant information on how to be a successful businessperson.

Keynote speaker was Craig Allen, Deputy Assistant Secretary for Asia of the U.S. Department of Commerce.  Mr. Allen discussed the many opportunities available to strengthen the commercial relationship between the United States and the Philippines, underlining a new White House initiative called the Partnership for Growth (PFG).  PFG is an effort to put into practice the principles of President Obama’s Presidential Policy Directive on Global Development.  According to Mr. Allen, “This is very much a White House initiative and thus it is an agenda that we are anxious to effectively implement.”

He also mentioned that, “The United States wants to increase its engagement with the Philippines and expand trade and investment opportunities for both of our citizens… We expect similar growth in the bilateral trade relationship in the next five years and an effective PFG will support this growth.  This is a trading relationship with huge potential.  A little investment in this relationship will likely pay big dividends in the years ahead.”

“Unlike foreign assistance initiatives, PFG calls upon the U.S. government to be more comprehensive and creative in our development work—to reach beyond aid to all the instruments it can bring to bear in trade, private investment, and technical assistance to connect and amplify the impact of current investments and unlock the economic growth potential of the Philippines…. PFG will also include a focus on selected growth sectors of the Philippine economy:  agribusiness, information technology, tourism, logistics, and mining,” Mr. Allen said.

In his speech, Mr. Allen also mentioned about upcoming activities under APEC, the Asia-Pacific Economic Cooperation grouping.  The United States is the host country for APEC this year and the Philippines is one of APEC’s members.

Hopefully, this initiatives he mentioned can help the Save Our Industry Act, this bill which is pending in the U.S. House of Congress will allow American manufactured fabric to be exported to the Philippines where Filipino artisans will embellish accents on the fabric and then re-imported to the U.S. at favored nation tax brakes. This will revive the U.S. textile industry as well as provide work to thousands of Filipinos. Philippine Trade and Industry Commissioner Josephine Romero presented this important trade bill.

No Filipino convention is complete without a party – after the gala Friday night which was replete with an 18-piece band, the last day of the convention saw the attendees trekking to one last place to unwind, It was down to the Oregon Coast at the Chinook Winds Casino Resort.

The Philippine American Chamber of Commerce of Oregon (PACCO) did themselves proud by the very informative sessions and convivial atmosphere. They showed that Filipinos in Oregon have a respected presence in the community. They have the support from the Oregon Governor’s Office, the City of Portland Mayor’s Office, as well as the private sector and the community namely the Filipino American Association of Clark County and Vicinity (FAACCV), and the Council of Filipino American Associations of Oregon & SW Washington (CFAA).”