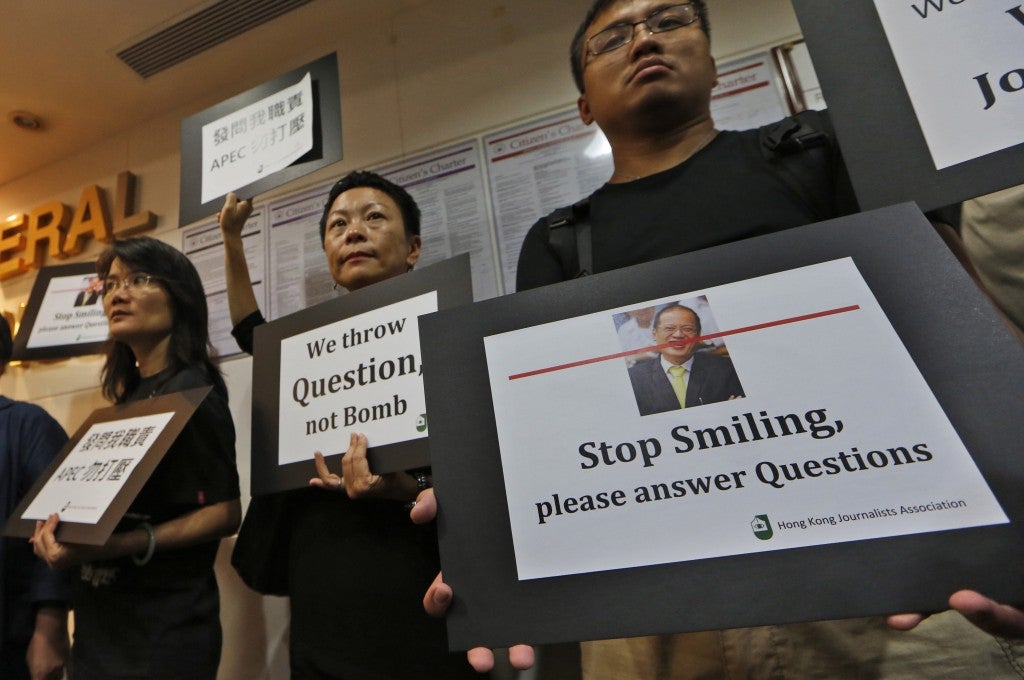 Members of Hong Kong Journalists Association hold placards during a protest at the Philippines Consulate in Hong Kong, Tuesday, Oct. 8, 2013. The association is protesting the treatment of Hong Kong reporters covering a regional economic summit in Indonesia, saying they were treated like a serious security threat by the organizers who barred them from the event after they shouted questions at Philippine President Benigno Aquino III, who was only willing to convey an expression of regret but not the apology that Hong Kong Chief Executive Leung Chunying wanted.  AP FILE PHOTO

The move came after journalists’ groups expressed concern over the blacklisting, which threatens to sour ties that the two nations have been trying to repair after eight Hong Kong tourists were killed in Manila in 2010.

“The journalists’ issue will be reviewed,” del Rosario told AFP, when asked if Manila would reconsider the ban on the journalists.

The reporters had their credentials withdrawn after they shouted questions at the Philippine leader during an Asia Pacific Economic Cooperation (Apec) summit in Indonesia last year and are currently unable to enter the Philippines for any reason.

They were blacklisted over “acts committed against the president during a summit in Bali, Indonesia,” Bureau of Immigration spokeswoman Elaine Tan said on Saturday without naming the nine.

Quoting intelligence officials, Tan said the journalists were a “threat to public safety.”

The Foreign Correspondents Association of the Philippines said the blacklisting sent a “chilling message.”

“If the government’s intelligence agency does not the like the way you ask questions, you may be labelled a public safety threat and blacklisted from the Philippines,” the group said.

Hong Kong newspapers reported that nine journalists from Now TV, RTHK and Commercial Radio have been banned ahead of the Apec summit to be hosted by the Philippines next year.

But Communications Secretary Herminio Coloma said his office has not started the accreditation process for journalists covering next year’s Apec summit.

Relations between the Philippines and Hong Kong were strained for years after Hong Kong tourists held hostage by a rogue Filipino policeman in Manila were killed in a botched rescue attempt.

The two governments announced in April that they had resolved the bitter row.