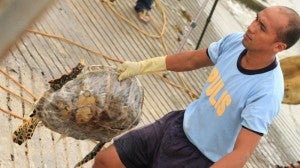 In this photo taken Saturday, May 10, 2014, a Philippine National Police Maritime Group officer holds a dead green sea turtle as he unloads them from the Chinese vessel Qiongqionghai 09063 at Honda Bay Wharf in Puerto Princesa city.  AP FILE PHOTO

“For violation of Section 87 or poaching, the court meted each of them a fine of $100, 000 (P4.3 million) each or in case of non-payment, a subsidiary imprisonment of six months,” Rodriguez said over the phone Monday.

He said the dollar amount of the fine was brought by the fact that “the Philippines has adopted the provision of the United Nation Convention on the Law of the Seas or UNCLOS” when it comes to poaching.

About the violation of Section 97 of RA 9147, the prosecutor said the court imposed a penalty of P120, 000 each and or imprisonment ranging from 12 to 20 years.

The Chinese fishermen are currently detained at the Palawan Provincial Jail pending payment of the penalty, said Rodriguez.

The fishermen were caught last May 6 for poaching. They yielded 216 live turtles, like Green Sea and Hawks Bill considered all critically endangered species of wildlife, and 381 assorted dead turtles

This is the same court that convicted 12 Chinese fishermen for poaching where its vessel ran aground near Tubbataha Reef Natural Park in Palawan.