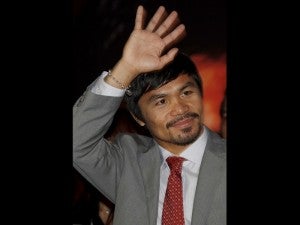 Just as the last of the Formula One banners came down, Yuletide greenery and merriment paraded through the halls of The Venetian early Monday: Manny “Pacman” Pacquiao’s bigger than life picture dominated the impressive lobby of the hotel with 10,000 employees, many of whom are Filipinos.

Pacquiao would not be short of fans after AirAsia pulled in two 120-seat planes from General Santos City to Macau just to make the Pacman feel at home.

Things could not seem to get any better for the Pacman with his newly formed hobby as coach, cheerleader and financier of his professional basketball team.

Coach Freddie Roach said the fans would not even finish queuing up for popcorn and soft drink, and the fight with Chris Algieri would be over in one round.

Could Macau be the place where the more than five-year knockout drought be finished? [Algieri was knocked down six times but the fight went the distance.]

Given this GenSan kid’s rags-to-riches story, expect some Chinese to see Pacman not just as a fighter but as a god.

Expect money, I mean “Manny,” to make Macau’s Christmas sweeter, as several big-time hotels tried to get a piece of the action by offering overnight packages with two tickets for the fight since The Venetian’s 3,000 rooms had been booked.

Expect more Chinese to hum the song “I want to be a millionaire.” Pacman is a real millionaire and yet he remains “humble.”

Christmas did come early this year.