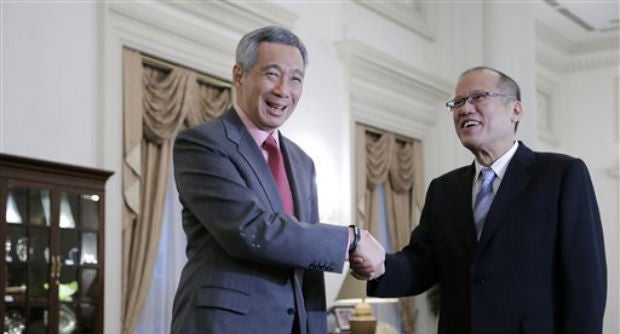 AQUINO IN SINGAPORE President Aquino (right) meets with Singapore’s Prime Minister Lee Hsien Loong during a visit at the Istana in Singapore on Tuesday. Aquino is in Singapore for a two-day working visit that includes meeting businessmen and economists. AP

SINGAPORE—Singapore is looking forward to a peaceful resolution of the territorial disputes between the Philippines and China as it reaffirmed its commitment to uphold regional stability as a member of the Association of Southeast Asian Nations (Asean).

The President arrived here on Tuesday for a two-day working visit highlighted by meetings with Singapore’s top officials and business leaders and a keynote speech at a “rare gathering” of business leaders, The Economist Magazine’s “The World in 2015” forum.

Presidential spokesman Edwin Lacierda said it was the Singapore prime minister who brought up the subject of the territorial dispute, asking Aquino about the latter’s 10-minute talk with Chinese President Xi Jinping at the Asia Pacific Economic Cooperation (Apec) leaders’ summit last Nov. 11 in Beijing.

Aquino even showed Lee a copy of Chinese state-run news agency Xinhua’s report about his encounter with Xi, which he had on file.

“Prime Minister Lee read the statement and his remark was: ‘Oh, it was a generous discussion,” said Lacierda.

“We look to a just and amicable outcome with your relations with China,” Lee was quoted as saying by Lacierda.

Lee also emphasized that “the Asean will always work for its members and for regional stability,” he said.

Lacierda said the Philippines and Singapore shared the view that their respective bilateral ties with China were “not one-dimensional.”

“[Prime Minister Lee] recognized that we need to protect what is rightfully ours, and at the same time, make sure that we maintain good relations with China,” he said.

“Both were in agreement that the relationship with China is not focused on the dispute. And also that the Association of Southeast Asian Nations as a whole, as a bloc, can always discuss things with China,” Lacierda said.

“In Lee’s view, China does not want to go to war, China would like to have peace with its southern neighbors. President Aquino’s answer was that ‘we also do not intend to do that. My interest here is how to improve the lot of the Filipinos,’” Lacierda said.

“So if there are no apprehensions about the South China Sea, we can concentrate on making our country more prosperous, more economically viable with respect to trade relations with China and other members of Asean, of Apec, and other regional trade groups,” Lacierda quoted Aquino as saying.

Lee was curious about who will succeed President Aquino, “so he spoke a bit about ‘who will be your successor?’” said Lacierda.

“Of course, the President mentioned the virtues of a successor, the one who will carry out and continue the reforms that he has started,” but did not name anyone, said Lacierda.

“I hope your successor will be someone who will also continue your policies with respect to Asean,” Lee was quoted as saying.

Aquino also briefed Lee about the progress of rehabilitation efforts in the Eastern Visayas a year after the devastation wrought by Super Typhoon “Yolanda.” Singapore was one of the first countries to provide assistance to the Philippines following the typhoon.

Singapore President Tony Tan, who checked on reconstruction efforts in Samar when he visited the Philippines last April, hosted a luncheon in honor of Aquino on Tuesday.

The President left Manila at 7:50 a.m. Tuesday on a Philippine Airlines chartered flight with a 54-member delegation. The government has allocated P11.6 million for the President’s trip.

“We are going to attend a forum titled ‘The World in 2015’ upon the invitation of The Economist, a prestigious magazine read and followed by the world’s decision-makers,” Aquino said in remarks before his departure.

“This is not a typical gathering. If at the Apec summit, we were with leaders of different countries, in this forum we will be speaking with leaders of the world’s biggest companies under one roof,” he said.

The president noted that the gathering in Singapore was a rare opportunity for him to meet the world’s business leaders. “We can directly answer any of their questions about the business climate here in the Philippines,” he said.

According to Aquino, meeting important businessmen at the forum gets rid of the usual process of going through channels which takes time and significant amounts of money.

Aquino also said he would be meeting overseas Filipino workers in Singapore at the Jollibee store at the Lucky Plaza mall, a known hub for Filipinos in Singapore.