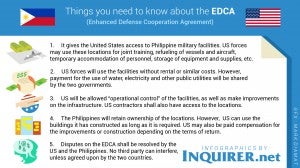 The Enhanced Defense Cooperation Agreement (Edca), the new security pact between the Philippines and the United States, was signed by Defense Secretary Voltaire Gazmin and US Ambassador to the Philippines Philip Goldberg hours before the overnight visit of US President Barack Obama to Manila on April 28 and 29.

Edca grants the United States greater access to Philippine military bases, including the construction of facilities and storage of defense supplies.

In May, former Senators Rene Saguisag and Wigberto Tañada, among the 12 members of the Senate who voted to kick US military bases out of the country in 1991, along with militant groups, lawyers and representatives from religious and academic communities, filed petitions questioning the legality of Edca.

The petitioners claimed that the agreement violated several provisions of the Constitution, including the ban on foreign military bases and facilities on Philippine territory without Senate approval.

In seeking the nullification of the agreement, the petitioners said Edca might facilitate the entry of nuclear weapons into the Philippines, which is not allowed by the Constitution.

In July, Edca served as the grounds for the third impeachment complaint filed against President Aquino.

The House of Representatives accepted the third impeachment complaint on July 24.

The complaint was filed by activists in the Makabayan coalition led by its president Satur Ocampo and Teddy Casiño, a former party-list House member representing Bayan Muna.

It was endorsed by two lawmakers in the Makabayan bloc in the House: ACT Teachers’ Antonio Tinio and Gabriela’s Emmi de Jesus.

The grounds for impeachment cited were culpable violation of the Constitution and betrayal of public trust arising from the President’s support for Edca.

All impeachment complaints against Aquino were dismissed in September.

On Oct. 11, the Office of the Solicitor General (OSG) defended the agreement between the Philippines and the United States, and asked the Supreme Court to dismiss petitions questioning its constitutionality.

In a consolidated comment, the OSG emphasized the legality of the executive agreement, saying that Mr. Aquino entered into the pact as part of his sworn duty to protect the state.

“The President, through the DND (Department of National Defense), entered into the Edca to perform his primary constitutional duty to promote national security interests. Under Article II, Section 4, of the Constitution, the President, as head of state and chief representative of government, has the ‘prime duty to serve and protect the people,’” said the nine-member OSG panel on the case led by Acting Solicitor General Florin Hilbay.

The pleading cited how “geopolitical concerns today involve transboundaries”-an apparent reference to how Edca was signed amid Philippine efforts to enhance its external defense capabilities in the face of unresolved territorial disputes with China and America’s strategic pivot to the Asia-Pacific.

“Recent events within Philippine territory undoubtedly compromise the security of the Philippines. The Honorable Court should not render the President helpless or impair his ability to set up a national security apparatus in the face of clear, present and verified reports of activities that endanger the integrity of the Philippine State,” the OSG said.

On Oct. 24, the Supreme Court launched a microsite on its website to provide wide public access to the coming oral arguments on Edca.

The high court uploaded both the petitions questioning the constitutionality of the agreement and the government’s consolidated comment on the legal action to the website.–Inquirer Research