Aquino hopes to help Turkey vs threats like ISIS 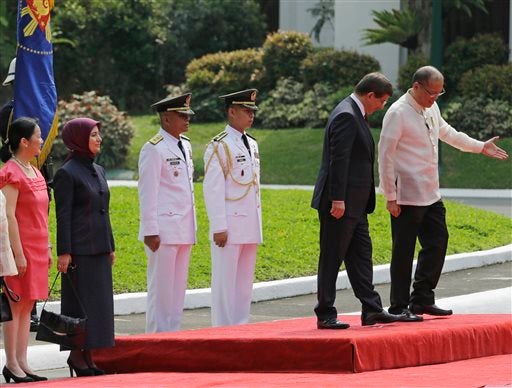 MANILA, Philippines – In exchange of Turkey’s help in promoting peace in Mindanao, President Benigno Aquino III on Monday said he could return the favor by helping the country face challenges.

“Just as your people have partnered with us in advancing a just and lasting peace in Mindanao, allow me to say that it is my nation’s hope that we will be able to help Turkey as it confronts the persisting and emerging challenges of our time, such as the threat of ISIS (Islamic State of Iraq and Syria),” Aquino said during a state luncheon at Malacañang for Turkish Prime Minister Ahmet Davutoglu.

“Rest assured, you will find a partner in the Filipino,” the President said.

Turkey is a member of the Organization of Islamic Cooperation, which closely assisted in the brokering of the 1996 peace deal between the Government of the Philippines and the Moro National Liberation Front (MNLF). The country is also part of the International Contact Group and the Independent Decommissioning Body that plays a part in the talks with the Moro Islamic Liberation Front, which will later pave the way for the Bangsamoro political entity.

During his speech, Aquino acknowledged Turkey’s “difficult challenge of addressing the threat of ISIS in the embattled town of Kobane in Syria, which borders [Turkey].”

“It is a threat that has brought great conflict to that nation and to many other nations beyond that vital region,” he said of the extremist group.

“The various pressures presented by extremism seek to test the resolve of Turkey, a nation that has stood witness to many great battles in history, and I believe the government and people of Turkey, under your able leadership and that of President Erdogan, will continue to demonstrate the vibrant resilience that embodies Turkish civilization,” he added.

“I can assure you Mr. President whenever you are in need of assistance, Turkey, despite of geographical distance, will be the first one to come here and to be with you shoulder-to-shoulder to face any challenge,” he said.

He described ISIS as a terrorist group, which engaged in “very brutal” killings.