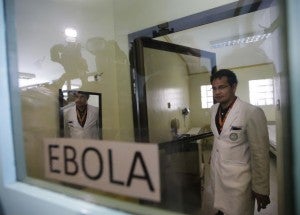 Dr. Mark Christopher Pasayan of the Research Institute for Tropical Medicine emerges from one of the isolation rooms during a media tour of the facility to show the Government’s readiness in dealing with the still Ebola-free country Tuesday, Oct. 21, 2014 at Alabang, Muntinlupa city. AP FILE PHOTO

MANILA, Philippines – Nearly three months after the Department of Foreign Affairs (DFA) initially announced they are preparing to implement mandatory repatriation in Ebola-affected countries in West Africa, the “finishing touches” of the repatriation scheme has yet to be worked out.

“There are still some finishing touches, mechanisms waiting to be put in place,” DFA spokesman Charles Jose said in a press briefing Monday.

Among the items they have yet to settle is where returning overseas Filipino workers (OFWs) would be quarantined upon their arrival in the country.

The DFA announced last August 24, 2014 that they are “preparing for the implementation of mandatory repatriation of Filipinos” in Guinea, Liberia, and Sierra Leone, the countries severely affected by the Ebola virus.

“It is an interagency coordination work … we are still waiting for advice from the concerned agency like the Department of Health,” Jose said.

“[We are discussing] how to go about the implementation, what happens to OFWs when they are repatriated, what exactly should we do with them,” he said.

“They believe the level of risk is low because they are not exposed to patients infected with Ebola. They are also concerned for economic reasons such as they won’t be able to find a job in the Philippines that pays as much as what they have there,” Jose said.