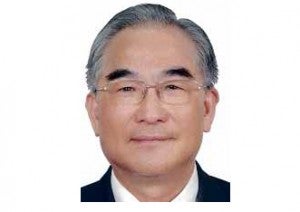 MANILA, Philippines—One “small incident” should not get in the way between the Philippines and Taiwan.

The Taiwan Economic and Cultural Office’s (Teco) new representative in the country sees a revival of ties between the two sides following turbulent times in the aftermath of the fatal shooting of a Taiwanese fisherman during a chase with Philippine Coast Guard (PCG) men at the Balintang Channel in May last year.

“Actually, I believe my appointment here is also a reflection that my government also has goodwill to restrengthen the relationship, not to let the small incident [affect the relations],” said Gary Song-Huann Lin, Teco’s new top official in the Philippines who arrived here two months ago.

“As close neighbors, of course sometimes we have small incidents, even like when we live in a community, [it’s] no different. So we have that kind of mutual understanding and goodwill to work together and to further enhance [our relationship],” he told the Inquirer on Thursday.

Lin appreciated the Philippine government’s action on the May 9, 2013 incident, where Taiwanese fisherman Hong Shi Cheng was killed when PCG officers opened fire at his boat as they patrolled waters off Batanes.

Hong’s death strained ties between the two sides and sparked Taiwanese outrage against the Philippines, with its government imposing various sanctions against the country.

The Philippines abides by the one-China policy and handles its ties with Taiwan through the Manila Economic and Cultural Office under the Office of the President, not the Department of Foreign Affairs (DFA).

“First of all, we fully respect your sovereignty and also your judicial system. We believe that the law will take its own course, so long as both sides will cooperate together and prepare the platform,” Lin yesterday.

“So whatever the outcome, we’ll fully respect, so long as both governments will work together to allow the judicial process to unfold and to take its own course. That’s our basic stand,” said Lin over a lunch meeting with the Inquirer.

He cited the Department of Justice (DOJ) and the National Bureau of Investigation (NBI) for “the very gracious cooperation” with Taiwan in efforts to bring Hong’s death to justice.

“We work together to bring this matter to a full close, so our cultural relations can be restored, and then we can move on to a new level of cooperation and interaction,” said Lin, who earlier in the day took part in the commemoration of the NBI’s 78th anniversary.

He said the Taiwanese side is in constant cooperation with the Philippine government as the trial proceeds.

“Actually, from our perspective, your government fully cooperated, and is actually also doing its very best to do everything to try to heal the past wounds,” said the official.

Amid growing anger in Taiwan over the incident, President Aquino himself apologized for Hong’s death last year. The DOJ is, meanwhile, prosecuting the country’s own PCG men for using excessive force in pursuing Hong’s vessel.

The DOJ panel is set to present Hong’s son, Hong Yu Tzu, as its first witness when the trial resumes on Nov. 25 at the Batanes Regional Trial Court.

The prosecution team is currently making arrangements to fly Hong to the Philippines for the court date, and to also find an interpreter as he is expected to make his testimony in Mandarin.