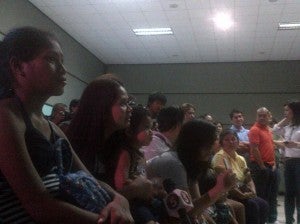 Some relatives of peacekeepers stayed at the Villamor Airbase to watch the livestream of the arrival of the UN Peacekeepers from Liberia.

MANILA, Philippines–The Filipino peacekeeper who has been quarantined for having a fever has been brought to the Research Institute for Tropical Medicine in Muntinlupa City, the Department of Health said on Friday.

DOH spokesperson Dr. Lyndon Lee-Suy confirmed to INQUIRER.net that the peacekeeper was not at RITM for further observation but declined to give further details.

The state-run medical facility is equipped to handle Ebola cases in the Philippines.

In an afternoon radio report, DOH officer-in-charge Janette Garin said the peacekeeper no longer had fever but was still feeling weak.

The peacekeeper was one of the 133 Filipino soldiers who returned from Ebola-stricken Liberia last Wednesday. They will be quarantined for three weeks on Caballo island. An earlier report said that the fever of the peacekeeper could be a relapse of a previous case of malaria.

Before the repatriation of the peacekeepers, all of them passed the Ebola screening conducted by UN doctors.

Nearly 5,000 people had died from the deadly virus in West Africa since December last year.

The DOH maintained that the country remains Ebola free.

Lieutenant Colonel Harold Cabunoc, military public affairs office chief, said that the incident should not cause panic as the military and the DOH are on top of the situation.