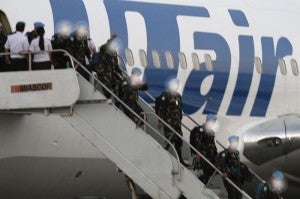 Filipino peacekeepers from Liberia arrive at Villamor Airbase on Wednesday, November 12, via UT Air at 5p.m. There are 133 peacekeepers coming home — 108 from the Armed Forces of the Philippines, 24 from the Philippine National Police and 1 from the Bureau if Jail Management and Penology. PHOTO FROM PHILIPPINE AIR FORCE

MANILA, Philippines—The Department of Health is keeping a close eye on a Filipino peacekeeper who developed symptoms of the dreaded Ebola virus on the second day of the government-imposed 21-day quarantine period on Caballo Island near Corregidor following their return from Ebola-stricken Liberia on Wednesday.

At a press briefing, Acting Health Secretary Janette Garin announced that the peacekeeper developed fever, chills and malaise early Friday and was immediately tested for Ebola. Results of the test will be available in two days.

“Because he came from Liberia, we are testing him for Ebola,” Garin told reporters. But she was quick to clarify that those coming from Ebola-hit countries were not necessarily infected with the virus.

Malaria is endemic in West Africa, which is currently being ravaged by the worst Ebola outbreak in history. The DOH also noted that out of the 120 peacekeepers who returned to the country from Liberia earlier this year, 19 of them got sick with malaria.

“There is a possibility that his malaria came back or that he was not efficiently treated before,” said Garin, adding that the Philippines continued to be Ebola-free.

She also announced that the sick peacekeeper was transferred to a government hospital, which she did not identify, to ensure that he was not infected with Ebola, which has claimed more than 5,000 lives so far.

A review of the malaria treatment that he previously underwent will also be conducted at the undisclosed hospital, she said.

“For now, there is no need for the use of personal protective equipment for this case because he is just experiencing fever and has no body secretions like vomit, urine or diarrhea from which the virus can be transmitted,” she added.

DOH spokesperson Dr. Lyndon Lee-Suy told reporters that although there was no need for the use of special protective suits at this point, those transporting the peacekeeper wore protective suits, gloves and masks for safety.

The peacekeeper was also made to wear a face mask during his transfer, said Lee Suy.

“Without body fluids being released like vomit, diarrhea or blood, the risk is less,” he said.

A total of 133 Filipino peacekeepers returned from Liberia via a United Nations-chartered Russian flight on Wednesday. Upon touchdown at the Villamor Air Base, they were immediately brought by ship to Caballo island.

They were earlier cleared of Ebola infection by UN health officials.