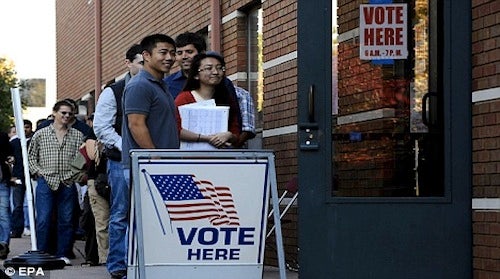 The study, called the 2014 Asian American Election Eve Poll, was conducted between Oct. 30 to Nov. 4 via landline and cellphone interviews with 1,150 of these voters in California, Texas, and Virginia.

In Texas, most were split down the middle between Republican candidate Greg Abbott and Democratic candidate Wendy Davis, with most Asian American women in support of Davis, who lost.

Voters were pivotal in the victory of Democratic Virginia Sen. Mark Warner, favoring him more than 2-1 over his opponent, Republican Ed Gillespie.

Among Asians, 58 percent expressed approval of President Barack Obama’s performance in office, which is 15 percent higher than the national consensus.

Despite the trend in Democratic support, 40 percent of Asian Americans did not identify as a Republican or Democrat but as Independents.

Of those who identified as Republicans one out of six still voted for Democrats.

Other poll findings included that 32 percent of Asian Americans stated that the economy and jobs were the most salient issues facing the community. Other pressing issues included education and schools, healthcare and immigration reform.

Asian Americans currently account for nearly 6 percent of the US population and are the fastest growing segment of the electorate with potential to affect election outcomes.

Still, historically, Asian American voter turnout has been low, and findings in the election eve poll suggest that one reason for this could be that 56 percent of Asian Americans were not contacted about registering to vote.

During the Tuesday elections, Asian Americans Advancing Justice reminded voters to request for language assistance at the polls as part of the Voting Rights Act.

The website cited that 32.65 percent of Asian American voters in North Carolina have limited English proficiency, as well as a post-2012 election survey that revealed a 9 percent lower turnout for those who aren’t as proficient in English.

Exit polls presented in the Washington Post and CNN showed that about half of Asian American voters went for Republican candidates.

Similarly, a Gallup poll found that 51 percent of Asian Americans disapproved of President Obama’s performance, while only 43 percent supported it.

However, Taeku Lee, professor of political science at UC Berkeley and managing director of Asian American Decisions, said these do not accurately represent the voting behavior of this growing ethnic group.

By contrast, the 2014 Asian American Election Eve Poll was conducted with a multi-ethnic, multilingual sample.

Most Asian Americans are familiar with Hilary Clinton, who is a positive brand to the community.

However, a surprising finding, according to Lee, was that Republican Party presidential hopefuls were largely unheard of among Asian Americans.

The community was most likely to recognize former Florida Gov. Jeb Bush out of a lineup of Republicans including Chris Christie, Ted Cruz, Bobby Jindal and Rand Paul.