As a journalist, I sometimes suddenly stumble into strange worlds which are mind-boggling or heartrending. Such was my trip to Japan, my very first and only (as of this writing),—10 days, that was all—fraught with spiritual insights about, not the Japanese, but the Filipino.

Let me first tell you about my Japanese friends who hosted me. There was lawyer Kenshi Nishida, a human rights lawyer who filed court cases against rich Japanese businessmen who abandoned their pregnant japayuki mistresses, eventually returning home to the Philippines without support for their nissei children (first generation of Japanese father and foreign mother).

Kenshi’s style was simple but effective. He would write a terse letter to the father, saying that if he fails to support his child in the Philippines, he would be sued black and blue, which the wife would eventually know about.

It would be the greatest shame in Japanese society. Kenshi always won without filing a single case in court. The father, in utter fear, would bow in humility to atone for his sin.

Kenshi was a hero who rescued hundreds of japayukis from poverty. God bless your wonderful soul, Kenshi.

Kenshi was quite a character. As a young man, he was the first Japanese to cross the Andes from Peru in the west to the mighty Amazon River of Brazil in the east.

It took him two years. That dwarfs my eastwind travels hitchhiking across Europe and North Africa for three years (book titled “Wings and Wanderlust”). 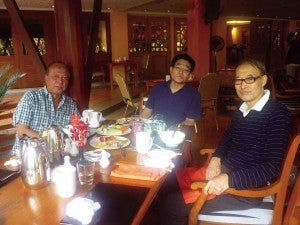 He talked about immersions in ancient Andean tribes insulated from the world.

Then there was Dojin Okada, even more of a character. He was the famous producer of the television documentary exposing the Minamata disease.

We coproduced a documentary about the 30 odd stragglers (largest in the annals of World War II) who roamed the forests of Mt. Kitanglad in Bukidnon, becoming cannibals who ate 85 odd Higaonon tribesmen for two years before surrendering in 1947. That made him even more famous.

IN OUR first true story, Kenshi-san, Dojin-san and I drove by car to Yamagata in order to take a sulphur bath in a hot spring, and to interview a few japayukis whom Kenshi knew. I was computing our expressway toll in pesos for the three to four-hour trip, about P8,000 one way.

And so I met Lisa. She lived in a container van where doors and windows were cut out of the metal walls.

Lisa, as a japayuki in Tokyo, met a young handsome Japanese guy who visited her at the club every day, and showered her with expensive gifts.

For Lisa, he was the rich prince charming. They quickly fell in love and got married, only for Lisa to discover later that her wealthy paramour was really just a construction worker.

The guy was later laid off his work, and they moved to Yamagata. Lisa worked again in a club, supporting her husband. She would breast-feed during the day and work in the club at night.

It was a sad story—the ambition to find wealth quickly through a prince charming who was charming but not a prince.

THIS is our second true story. I met Rose because I was the courier for a friend in Manila to bring her an expensive diamond ring.

Rose married a rich Japanese plantation owner. She was well educated and had been an executive secretary back in Manila.

The worlds of a farmer and a professional were poles apart, but Rose tried hard to bridge the gap. She was strong and could take anything.

The farmer loved her fanatically and pampered her as his queen. They had a sprawling farm home. He gave her her own sports car of her choosing.

But he had a terrible fear that Rose would leave her, so he insulated her from the world. He forbade her from seeing any Filipino.

She used her sports car only to bring their daughter to school every day. Her social life was zero.

When I met Rose, she was in a terrible state of depression and loneliness. She did not tell her husband she would meet me, but the ring was important to her. She blurted out her sad story in a small crowded café, as I listened in silence and shock.

I told Rose it was unfair that she would live in utter wealth and misery all at once. I gave her a few names from the Filipino community that Kenshi gave me. They were mostly chambermaids and househelp mixed with a few japayukis, whom she could secretly meet.

Rose was in tears. She told me I was sent by heaven, an answer to her constant prayers. She held my hand hard before we parted.

After a month, I found out later from Kenshi in Manila that she was doing very well, secretly seeing these Filipinas, and was very happy. She became a dear friend of the group, and even rescued a few financially.

They looked up to her as a leader. She initiated a movement to rescue Filipinos in distress. It was her way of giving back to the group who rescued her.

THIS true story was told to me by a japayuki inside a crowded smoke-filled nightclub in Tokyo.

Kenshi wanted me to meet and talk to a few of them. I was a bit uncomfortable because we had to “table” the two girls who were at work.

Interview in a noisy nightclub was not exactly easy. I asked one girl to give me a nice true story from her five years as a veteran hostess.

She told me about Jennifer, an Ilongga, a very dominant girl who had her rich timid husband under her thumbs.

In Japanese macho culture, a woman in charge is extremely anathema, a total shame for a man. But that was the way it was. Jennifer and her husband agreed that when his mother was visiting, they would pretend he was in charge, to save him from shame in the family. Jennifer gladly agreed.

And so, when her mother-in-law came, the husband would boss her around, tell her to cook, prepare beddings, and so on.

It was not hard for Jennifer to play the role of the submissive Filipino geisha. As soon as the mother-in-law left, things were back to normal.

In traditional culture, the Japanese frowned on marriage to foreigners.

The mother-in-law, in spite of Jennifer’s kindness, shouted and insulted her every time she visited.

For an Ilongga, this was nothing. This was one golden trait of Filipinos in Japan, patience, humility and giving kindness in return for cruelty.

She had a hard time suppressing her smile whenever she would get a barrage of insults, and get lessons on how to be a proper wife to her son.

One day, the mother-in-law contracted cancer of the uterus. The couple moved her to their home, as she did not have a nurse. Jennifer ended up taking care of her. She did not complain. She relished doing it out of love for her husband.

In the beginning, the mother-in-law kept insulting her, but when she felt Jennifer’s warmth as a comfort for her pain, she apologized to Jennifer in tears.

Jennifer embraced her and from then on they became the best of friends. They would spend long hours talking. Love conquers all. Jennifer had a hard time pretending to be the submissive wife every day. The husband would wink at her. That was good enough for Jennifer.

Finally, after two years in the care of Jennifer, she died. For Jennifer, to turn cruelty to goodwill was not a monumental feat. It was as easy as pie, done out of love.

Kenshi bought me a Eurail kind of train ticket good for 10 days. I could ride to any place. In Kyoto, I stayed at a five-star hotel compliments of Dojin’s boss at TVS, the television network. I had a luscious dinner where Kobe beef was cooked in front of me. I felt guilty because the dinner cost about 20,000 yen.

I will never forget Narra, the ancient capital which had eighth-century temples when our oldest were 16th-century churches.

Instead of taking the bus, I rented a bike, got a map and toured the entire small city the whole day.

My eastwind caper in Europe flashed in my mind. This was a brief extension. I was totally mesmerized by an inner walled area where ancient temples were concentrated. I could feel the spirits of the Bushi warriors.

I did not know they closed the gates at 5 p.m. I kept walking in circles looking for an open gate for half an hour, until an old lady, laughing at my predicament, rescued me.

I bought a small bottle of sake at a village store, leisurely biking in the twilight. Drunk on the train going back to Kyoto, I thought how lucky I was in my serendipity, not so much seeing beautiful places, but meeting beautiful people.