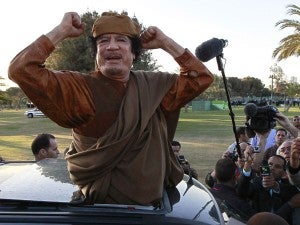 MANILA, Philippines—The Philippine government said Friday four Filipina maids who had been working for deposed Libyan leader Moammar Gadhafi’s family were missing and had made a tearful call home for help.

The four had been working for one of Gadhafi’s nieces in Tripoli before the rebel advance sent the strongman and his relatives fleeing the Libyan capital. Over recent days one of the four made a mobile phone call to her sister in the Philippines appealing for help, although little information about their location was given, said Vice President Jejomar Binay’s spokesman.

“We don’t know where they are. All they said is they are always crying,” the spokesman, Joey Salgado, told Agence France-Presse.

Binay, who also serves as a special adviser on the country’s overseas workers, has asked the Department of Foreign Affairs to help find the four but no progress has been made due to the chaos in Libya, according to Salgado.

In March, the Philippines said it received reports that four Filipina maids working for a relative of Gadhafi were asking to be allowed to go home but their employer had refused.

The four were initially employed at a Gadhafi family house in Tripoli, but were later transferred to Sirte, the deposed dictator’s hometown in mid-March, the DFA said at the time.

However Salgado said he did not know whether the four maids currently missing were the same ones reportedly trapped in March.

The foreign department said it was trying to find the maids but would not comment further.

As of last week, around 1,600 Filipinos were still believed to be in Libya, many of them nurses treating casualties of the months-long uprising against Gadhafi.

About nine million Filipinos work around the world, earning more money in a wide range of skilled and unskilled sectors abroad than they could in their impoverished homeland.