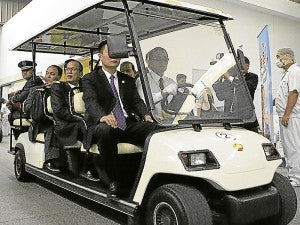 SHANGHAI SURPRISE. President Aquino appears impressed during a tour of Liwayway Marketing Corp.’s factory led by its owner Filipino tycoon Carlos Chan, (seated beside the President, partly hidden) oldest brother of Ben Chan of Bench. The Chan family manufactures the Oishi brand, the largest snack food in China. They have 15 factories all over China and subsidiaries in Asean countries. EDWIN BACASMAS

SHANGHAI—President Benigno Aquino III on Friday said the reception accorded to the Philippine delegation by Chinese officials and business leaders has exceeded his expectations.

Mr. Aquino wouldn’t give figures but said he expected the Philippines to corner a significant portion of the $1-billion China-Asean Fund.

“It’s amazing that they are allocating, setting aside a very huge amount for the Philippines. It’s a significant portion of the fund,” Mr. Aquino said in an interview following his visit to the Filipino food corporation Liwayway’s plant in this city.

“Of course, if we could show that their investment is worthwhile, I think they will even add to the endowment. If the results are good, it seems they are concentrating on us,” he added.

Asked how much was being allocated to the Philippines from the China-Asean Fund, Mr. Aquino chose to withhold the information as the contract has yet to be signed.

“What I can tell you is that it’s more than 10 percent of their initial fund. The fund is $1 billion,” Mr. Aquino said.

Mr. Aquino was upbeat about the reception and interest of Chinese business leaders in investing in the Philippines.

“The members of the economic team are summing up the details. There is a category of those that are already certain. There are also those that have details that still need to be ironed out before we can announce it,” Mr. Aquino said.

The amount of the investments generated, Mr. Aquino indicated, would be announced when he arrives in the Philippines this weekend.

“On the one hand there’s the interest, there’s the eagerness and when we were just starting, they were saying, ‘Who should we talk to and how should we link up with your chambers of commerce?’ It’s good that the president of the Federation of Filipino-Chinese Chamber of Commerce was behind the person I was talking to,” Mr. Aquino said.

Aside from the Filipino-Chinese chamber, Mr. Aquino also mentioned the business associations in the country and the wealthiest business leaders that joined him on this trip.

“So the linkages are really fantastic and is proving appropriate to our needs; power generation for instance,” Mr. Aquino said.

“In the tourism aspect, there is one group… They will build, from what I understand, no less than 10 hotels in the budget sector in the next five years,” he added.

Mr. Aquino, however, said that the group was also involved in building five-star hotels.

“Then (on Friday afternoon), there was this time an airline, one of the biggest… Their target is to substantially increase the 200,000 tourists from China to the Philippines,” Mr. Aquino said.

Mr. Aquino said the interest shown by the Chinese business leaders even go beyond the traditional.

“Huawei had scholarships to grow our technological base. They have a commitment to increase that. They are also inviting for scholarships in their headquarters and they would give us much help in the field of telecommunications,” Mr. Aquino said.

Mr. Aquino said the company also has platforms to help the government in its tele-medicine, e-education and e-commerce programs as well as in the distribution of stipends in the government’s conditional cash transfer program.

Mr. Aquino started his day with a courtesy call by Shanghai officials. He then addressed the Philippines Eastern China Business Forum at the Shangri-La Hotel.

Liwayway is owned by Carlos Chan, who’s  considered the most admired Filipino tycoon in China where his Oishi brand product is the largest snack food.  Chan, who’s the older brother of Ben Chan of Bench, has 16 factories all over China and has subsidiaries in other Asean countries.

Early in the evening Mr. Aquino  addressed the Filipino community in Shanghai before having dinner with members of the Philippine business delegation.