Around 2 p.m. Tuesday, the Armed Forces of the Philippines has filed a verified disbarment complaint against lawyer Harry Roque for violation of the Code of Professional Responsibility. 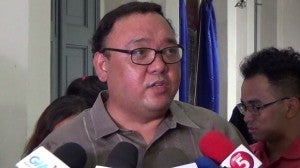 “As a lawyer, Atty. Roque is, at all times, subject to the watchful public eye and community approbation,” Cabunoc said.

“He is bound to maintain and live up to the standards of the legal profession not only in keeping a high regard of legal proficiency, which he undoubtedly possesses, but also of distinct high regard for morality, honesty, integrity and fair dealing.”

On October 22, Roque led the family of slain transgender Jeffrey “Jennifer” Laude and marched to the gate of the Mutual Defense Board-Security Engagement Board inside Camp Aguinaldo where US Marine Private First Class Joseph Scott Pemberton was detained.

Pemberton is the suspect behind the alleged murder of Laude in Olongapo.

During the ruckus on October 22, Laude’s German fiancè Marc Suselbeck and sister Marilou jumped over the fence of the MDB-SEB compound.

Cabunoc said that Roque’s “unlawful conduct” is prohibited under the rules of the Code of Professional Responsibility.

He added the complaint contains photographs of the October 22 incident and sworn affidavits from the witnesses, including the Filipino soldiers who were stationed on the MDB-SEB gate and compound.

“As a lawyer, he must bring honor to the legal profession by faithfully performing his duties to society,” Cabunoc said.

“He must refrain from doing any act that might lessen the confidence and trust reposed by the public in the fidelity, honesty and integrity of the legal profession.”