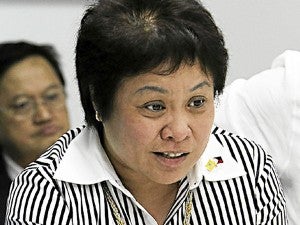 MANILA, Philippines — Revenue Commissioner Kim Henares may be unpopular among some groups threatened by her determination to collect taxes, but on the global front, United Nations Secretary General Ban Ki-moon has recently appointed her to the UN Committee of Experts on International Cooperation in Tax Matters.

An announcement by the Department of Finance said the committee is composed of 25 tax experts and senior tax administrators from 10 developed and 15 developing UN member-states.

Henares’ term started last October, and she will be part of the committee until June 30, 2017. Besides her, Xiaoyue Wang of China and Nasser Mohammed al-Khalifa of Qatar were appointed last month to complete the respective terms of three committee members from China, Qatar and Thailand who had resigned.

“Commissioner Henares welcomes her appointment to the committee as an opportunity to advance the interest of developing countries in the formulation of tax treaty commentaries and recommendations to various tax issues brought about by increasing globalization and integration of economies,” DOF said in a statement.

“Tax agencies, especially from developing countries like the Philippines, face serious challenges in enforcing laws and collecting taxes from cross-border transactions,” the DOF said, citing a 2014 Global Financial Integrity (GFI) report which revealed that the “Philippine government has lost at least $23 billion [in] tax revenues since 1990 from trade misinvoicing.”

GFI defines trade misinvoicing as “manipulating the price, quantity, or quality of a good or service on an invoice so as to shift capital illicitly across borders.”

For her part, Henares was quoted by DOF as saying that “Globalization does not just create opportunities for doing business; it also creates risks for tax evasion and base erosion.”

In the case of the Philippines, Henares said that “unlike advanced countries, we lack the capacity to tackle complicated cross-border tax problems,” hence “it is important to have this platform and be part of this body where developing countries are given special attention in dealing with these issues.”

DOF said Henares “has been active in international dialogues on Base Erosion and Profit Shifting (BEPS) and exchange of information where she has been very vocal about the challenges by developing countries in implementing global standards on tax transparency and fairness.”

According to the website of the UN’s Financing for Development Office, the committee Henares is joining—a body under the UN’s Economic and Social Council—“provides a framework for dialogue with a view to enhancing and promoting international tax cooperation among national tax authorities and assesses how new and emerging issues could affect this cooperation.”

Will Kim Henares get more of their pay? gov’t workers ask