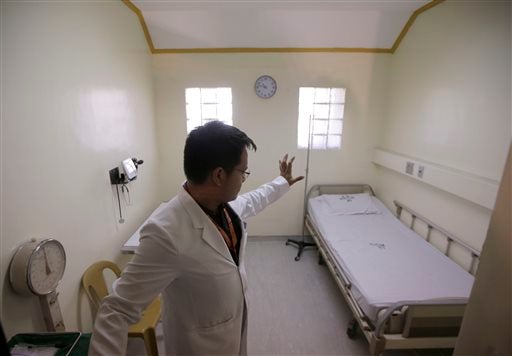 Dr. Mark Christopher Pasayan of the Research Institute for Tropical Medicine shows the isolation room of the facility during a media tour to show the Government’s readiness in dealing with the still Ebola-free country on Oct. 21, 2014 at Alabang, Muntinlupa city. The government on Thursday, Oct. 30, urged hundreds of Filipino citizens to leave Ebola-hit West African nations, as it announced that anyone who returns would be placed under a 21-day quarantine. AP PHOTO/BULLIT MARQUEZ

MANILA, Philippines–The government on Thursday urged hundreds of Filipino citizens to leave Ebola-hit West African nations, as it announced that anyone who returns would be placed under a 21-day quarantine.

Foreign Secretary Albert del Rosario said the government had made a “voluntary repatriation” call to about 900 Filipino workers in Liberia, Guinea and Sierra Leone.

With 10 million of its citizens working abroad, Del Rosario said the country was “very vulnerable” to the killer disease.

Only two Filipinos have so far enlisted for voluntary repatriation with the Philippine Embassy in Nigeria, which has jurisdiction over the three West African nations, said Charles Jose, the Department of Foreign Affairs spokesman.

Del Rosario said the government may require returning Filipinos to undergo a 21-day quarantine if they want to come home.

He said the government was preparing for the arrival of Filipinos from the Ebola-stricken West African countries, particularly the 114 Filipino soldiers with the United Nations peacekeeping force who will be returning home from Liberia next month.

About 300 others from private hospitals and local government offices will be trained in the coming weeks, according to Lyndon Lee Suy, the DOH spokesperson.

At least 20 government hospitals have been designated as Ebola referral and treatment centers, including three in the capital, Lee Suy said.

Del Rosario said there would be a center for the quarantine and this was being prepared.

“This would be a government-controlled quarantine facility,” he said, adding that this would be for those who would come home although he was not sure if all Filipinos there wanted to go home.

Before the President ordered a forced quarantine, 126 Filipinos who had returned home from the three West African countries were “monitored” by the health department in their homes, according to Lee Suy.

Twelve of the 126 developed a fever within the 21-day quarantine period but later tested negative for Ebola, he said.

The Ebola outbreak that has been ravaging West Africa has claimed 4,922 lives, according to the World Health Organization (WHO).

“We can’t say whether or not we’re prepared because that’s subjective, but we are in a better position to address the problem,” Del Rosario said.

The rate of infection in hard-hit Liberia appears to have slowed, the WHO said on Wednesday, but it warned that the crisis was not over.

There’ll be no stopping Ebola spread in PH, says expert