Palace: Sueselbeck given due process despite ‘undesirable alien’ tag 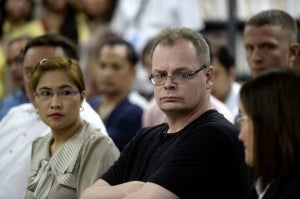 MANILA, Philippines–German national Marc Sueselbeck may have been prohibited from leaving the country amid being charged as an “undesirable alien” but it only shows that he is being given due process by the government, Malacañang said Monday.

Sueselbeck was the fiance of Jeffrey “Jennifer” Laude, a transgender woman allegedly murdered by Private First Class Joseph Scott Pemberton. Sueselbeck flew to the Philippines to attend the wake of Laude.

He and Laude’s sister Marilou made headlines after scaling the perimeter fence leading to Pemberton’s detention facility in an attempt to confront him. He was seen shoving a camp guard but had later apologized for what had happened.

However, when he was about to leave on Sunday evening, Sueselbeck was barred from leaving and was informed that he was included on the Bureau of Immigration’s watchlist. Foreigners declared “undesirable” will be deported back to their home country.

Lacierda said it would also be unfair to just declare Sueselbeck persona non grata and have him later learn that he has already been blacklisted from visiting the country.

Instead, he said a charge sheet was prepared and presented to Sueselbeck, giving him the opportunity to answer the charges.