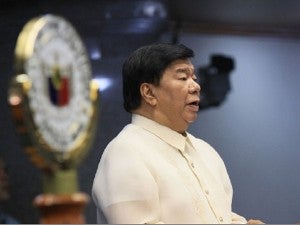 MANILA, Philippines–The Senate is expected to approve Monday a bill that would strengthen Philippine laws against illegal, unreported and unregulated (IUU) fishing in order to stave off the European Union’s (EU) possible ban on Philippine marine and fisheries products.

Senate President Franklin Drilon said a bill to amend the country’s fisheries code by providing stiffer fines and more administrative penalties has to be enacted into law by the end of the year to address the EU’s yellow tag warning.

The EU, in its 2012 audit report on the Philippines, said that the country’s present laws and regulations did not have enough sanctions and disincentives against IUU fishing.

“Failure to act on the yellow tag and the observations made by the EU in its 2012 audit report on the Philippines may result in the blacklisting of all Philippine marine and fisheries products in the European Union market,” Drilon said in a statement.

He said the amendments to give more teeth to the fisheries code must be approved to further keep the EU from putting the Philippines under the red flag category, which would categorize the country as a noncooperating nation by failing to fulfill its commitment to eliminate IUU fishing.

A ban would be detrimental to the fishing industry and the country’s economic growth, he said, noting that the local fishing industry represented 2.1 percent of the gross domestic product, according to a 2012 study from the Bureau of Fisheries and Aquatic Resources.

Drilon commended Sen. Cynthia Villar, chair of the committee on agriculture, for her prompt action on the fisheries code bill.

The measure seeks to impose a fine of P2.5 million to P10 million, or twice the value of the catch, whichever is higher, on large-scale commercial IUU fishing.