MANILA, Philippines—Is President Benigno Aquino III too busy? Will he ever show up in the wake of slain transgender Jeffrey “Jennifer” Laude?

Aquino on Wednesday explained to reporters during the Foreign Correspondents Association of the Philippines (Focap) forum why he has opted to shun Laude’s wake. 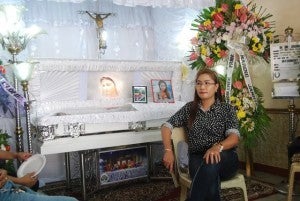 “In general, I don’t attend wakes of people I don’t know,” Aquino said.

“I’m not comfortable in trying to condole with people who don’t know me,” the President added.

Laude’s family earlier slammed the Aquino government for what they perceive as slow resolution ti her case.

Laude was found dead last October 11 in an Olongapo City motel where she was last seen with a man that looked like a foreigner.

US Marine Private First Class Joseph Scott Pemberton has been tagged as the primary suspect in her slay.

Pemberton was transferred Wednesday to Camp Aguinaldo from being detained onboard the USS Peleliu.

Due process must be followed, Palace tells Laude family