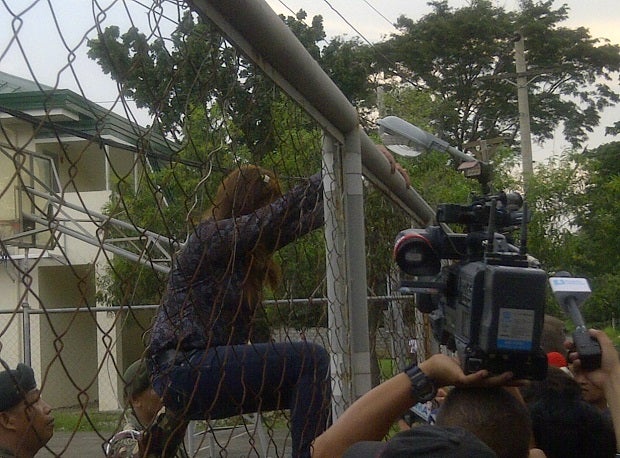 MANILA, Philippines – Tension gripped Camp Aguinaldo Wednesday afternoon after the German boyfriend of slain transgender, Jennifer Laude, and the victim’s sister climbed over the wire gate leading to the detention facility where US Marine Joseph Scott Pemberton was locked up and confronted the camp’s military guards.

During a tense moment, Marc Suselbeck pushed one military police while Laude’s sister Marilou appeared to be giving soldiers some tongue lashing.

Pemberton is detained at a container van at the Joint US Military Assistance Group at Camp Aguinaldo. 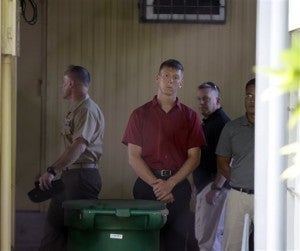 U.S. soldiers, in civilian clothes, stand outside the detention facility of U.S. soldier PFC Joseph Scott Pemberton, a suspect in the killing of Filipino transgender Jeffrey “Jennifer” Laude, after he was a flown in from the USS Peleliu Wednesday, at General Headquarters of the Philippine Armed Forces. AP

Marilou Laude and Suselbeck demanded that Pemberton be shown to them.

They said they would not leave until they talked to the US Marine accused in the gruesome killing of Jennifer Laude.

Meanwhile, a radio report said that there is no word from the Armed Forces of the Philippines if Marilou and Suselbeck would be arrested for breaching the camp’s security.

As of posting time, military authorities are trying to disperse the crowd that gathered behind the wired gate.

The case involving Pemberton and Laude came about as the Philippines and the United States began implementing a new accord that allows greater US access to Philippine military camps. Washington wants to reassert its presence in the region, and Manila to deter China’s territorial claims.

Left-wing activists and nationalist Filipinos have cited the custody provision of the accord — which says American military suspects shall remain in US custody until legal processes are over — as proof that the accord undermines the sovereignty of the Philippines, which was an American colony until 1946.

Pemberton’s transfer by helicopter to Manila was agreed by the US and the Philippines, AFP chief of staff Gen. Gregorio Pio Catapang told a news conference.

The 19-year-old Marine, who arrived in handcuffs, was detained in an air-conditioned container van with grilled windows, directly guarded by US Marines while members of the Philippine military police were at the fenced compound.

Laude’s mom on seeing Pemberton: ‘I will ask him why he killed my child”