MANILA, Philippines – Despite his transfer to a Philippine military camp, a US Marine suspected in the killing of a Filipino transgender will stay under the custody of the US, its embassy said in a statement.

“The US Embassy in Manila is aware of reports that an individual allegedly involved in the October 11 death of Jennifer (also known as “Jeffrey”) Laude, was moved from the USS Peleliu to Camp Aguinaldo, a Philippine military base located in Quezon City where the suspect will be held under US custody,” the embassy said.

It emphasized that under the Visiting Forces Agreement (VFA), the US has a right to retain custody of a suspect from the commission of the alleged offense until the completion of all judicial proceedings. 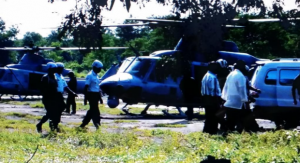 Screengrab from the Official Gazette PH via @HaroldCabunoc94

The US Embassy did not name Private First Class Joseph Scott Pemberton. Pemberton, who was identified by local police, is accused of killing Jeffrey “Jennifer” Laude in Olongapo City last October 11.

Foreign Affairs Secretary Albert del Rosario affirmed the US Embassy position, telling reporters after a Senate inquiry into Laude’s killing in aid of legislation, “Legal custody remains with the US but he is secured in Philippine territory with the Philippines participating in ensuring security.”

Senator Miriam Defensor-Santiago, who presided over the hearing, objected to the transfer of Pemberton and called it “offensive” and “unacceptable.”

“I don’t know if you can correctly call it surrender. They transferred him to the detention facility but he is still feeling at home there, its air conditioned, and also under guard. In other words, he is being given VIP treatment,” Santiago told reporters after the hearing.

“Definitely no Filipino who did his crime could be given the same kind of treatment, [which shows] he really is different. There you can see already the discrimination aspect or bias of the Visiting Forces Agreement (VFA) and for that reason we are calling for a review of the VFA,” she said.

Santiago said she would file a Senate resolution to renegotiate or terminate the VFA. But she pointed out that a resolution with the same intent had been filed back in 2009 but no such renegotiation or resolution came out of it.

“We already had five years for [US and Philippines] to renegotiate and there is ongoing review, but VFA has never been renegotiated,” Santiago said.

“It’s time for the executive department to heed the call of the legislative to renegotiate,” she said.

Pemberton’s continued stay at the USS Peleliu after the alleged crime was committed caused a furor and raised a debates about custody.

Pemberton was transferred to Camp Aguinaldo in Quezon City on Wednesday morning and is being detained inside a container van at the Joint United States Military Assistance Group, a Mutual Defense Board-Security Engagement Board facility.

The US Embassy assured that “the bilateral and military alliance between the Philippines and the United States is strong” and said that the VFA was “a key part of that relationship.

It said the US “planned to continue to work closely with the Philippine government to help ensure justice was served and the rights of all persons were protected,” the statement added.

Pemberton was part of the PHIBLEX (Amphibious Landing Exercises) war games between the Philippines and US held recently and was on a furlough when the killing happened. It is the VFA that allows the US to conduct military drills and humanitarian assistance projects in the Philippines.

“We again express our deepest condolences to the family and friends of the deceased,” the US Embassy said.