MANILA, Philippines — Senator Miriam Defensor-Santiago called the 15-year-old Visiting Forces Agreement (VFA) a “failure” because it merely served to keep the Philippines attached to its “former colonizer” the United States (US). 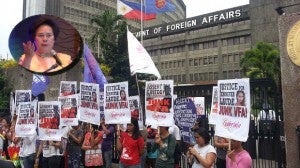 “The VFA is a historic document of inequity between a former colonizer and its former colony, which some global political analysts describe as a ‘failing state.’ The Philippines is failing because it has never grown up,” Santiago said during her opening remarks at a Senate hearing on the case of a US Marine who allegedly killed a transgender woman in Olongapo City.

“Never in the annals of modern political history has a country been so manipulated to serve the interest of another, and taught to be so ironically grateful for such an inequitable relationship,” she said.

He was previously detained on board the USS Peleliu but was transferred to a detention facility inside Camp Aguinaldo Wednesday morning. Which country is supposed to have custody of Pemberton has been widely debated.

“We are a stillborn state, because our umbilical cord with the US has never been cut,” Santiago said, citing the unequal provisions of the VFA.

The hearing was held to review the VFA following the Laude slay case and calls from several sectors for it to be terminated.
RELATED STORIES