WHO: PH preparations vs Ebola meticulous 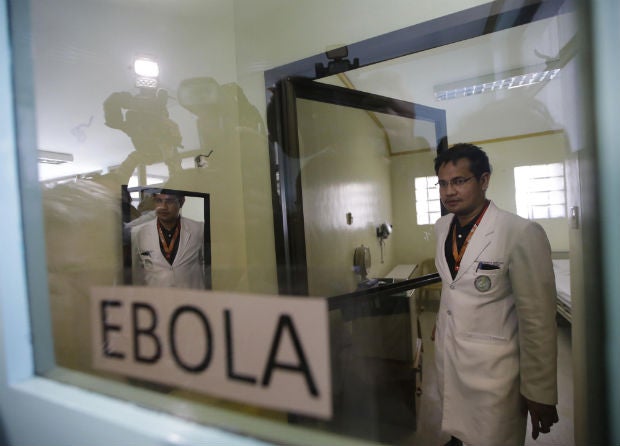 Dr. Mark Christopher Pasayan of the Research Institute for Tropical Medicine emerges from one of the isolation rooms during a media tour of the facility to show the Government’s readiness in dealing with the still Ebola-free country Tuesday, Oct. 21, 2014 at Alabang, Muntinlupa city. Julie Hall, WHO representative in the Philippines, described on Tuesday as very systematic and meticulous the government’s strategy to keep the country Ebola-free. AP/BULLIT MARQUEZ

MANILA, Philippines–A World Health Organization (WHO) official described on Tuesday as very systematic and meticulous the government’s strategy to keep the country Ebola-free.

Julie Hall, WHO representative in the Philippines, told a press conference at the Research Institute for Tropical Medicine in Muntinlupa City that the government had paid such “meticulous attention” and was conducting a “very systematic review of everything.”

She lauded, among others, the Department of Health’s (DOH) “production of guidelines, the Ebola summit to really get the awareness high” on Oct. 10 and the “series of trainings” organized for health workers.

In a statement, the DOH said the training was to “ensure the readiness of health-care workers in government and private hospitals for the potential entry” of the Ebola virus.

“I think what we have learned from all around the world is that with Ebola, you have to be very systematic and very methodical … and what we are seeing here with the government and with the sense of leadership of the secretary of health … [it’s] a very systematic approach,” Hall said.

She said this type of strategy was what was needed to fight the disease that has wreaked havoc in several countries in West Africa.

To ensure the country remained Ebola-free, the Philippine College of Physicians (PCP) yesterday proposed that the government charter flights for returning overseas Filipino workers from Ebola-infected countries and quarantine them for seven days upon their arrival in the country.

PCP president Dr. Anthony Leachon said exit screening and the quarantine process must be augmented to prevent the entry of the deadly virus into the country, especially with the anticipated influx of returning Filipino migrants for the holiday season.