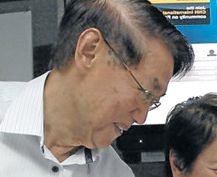 DAVAO CITY, Philippines—Hoping to finally resolve their decades-long conflict, the chief negotiator for the communist National Democratic Front of the Philippines (NDF) said its representatives were set to meet with the government side in Utrecht, the Netherlands, to explore ways to kickstart the stalled negotiations.

“A series of consultations between the NDF negotiating panel and a high level delegation from the GPH (Government of the Philippines) has resulted in a meeting between the two sides scheduled in Utrecht within the next few days. The two sides are discussing the possible resumption of peace negotiations after the collapse of talks on truce and cooperation in February 2013,” said NDF chief negotiator Luis Jalandoni in a statement to the Cordillera Human Rights Alliance.

The statement was posted on the Communist Party of the Philippines website.

Jalandoni did not say when exactly the meeting would be held or what issues would be discussed.

He said the meeting resulted from the efforts of the new special envoy appointed by the Norwegian government, which serves as the third-party facilitator in the negotiations.

“She is Elisabeth Slattum, who has experience with peace talks in Colombia, Nepal and Haiti. She and Espen Lindbaeck, the deputy director of the peace and reconciliation section of the Norwegian foreign ministry, came for talks with the NDF negotiating panel in Utrecht on Oct. 18. This new team expressed its willingness to help in the resumption of the formal talks and to hold the next meeting of the negotiating panels in Oslo,” Jalandoni said.

The NDF also expressed an eagerness to talk, but Jalandoni said this should be grounded on the previous peace agreements mutually accepted and signed by both parties.

“We reiterated our readiness to resume formal talks on the basis of past bilateral peace agreements in order to address the roots of the armed conflict,” Jalandoni said.

In the Hague Joint Declaration of 1992, both parties agreed to tackle substantive agenda, including human rights and international humanitarian law, socioeconomic reforms, political and constitutional reforms, end of hostilities and disposition of forces.–Karlos Manlupig, Inquirer Mindanao