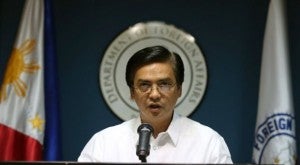 MANILA, Philippines – The US Marine accused of killing a Filipino transgender in Olongapo City should appear in the preliminary investigation “for his own sake,” the Department of Foreign Affairs (DFA) said Monday.

“Whether or not he appears, the [judicial] process continues even if he doesn’t appear,” DFA spokesman Assistant Secretary Charles Jose said in a briefing.

“His Filipino legal counsel should advise him to appear for his own sake,” Jose said.

Private First Class Joseph Scott Pemberton has been charged with the murder of Jeffrey “Jennifer” Laude in Olongapo City.

Laude was found dead with apparent strangulation marks in the bathroom of the hotel room she boarded with a man who looked like a foreigner on October 11, 2014.

Pemberton is presently in the custody of the US military on board a US Navy ship, the USS Peleliu, docked at the port of Subic.

Jose added that Pemberton will be “expected” by the prosecutor to attend the preliminary investigation.

“The prosecutor will expect the respondent to appear for preliminary investigation on basis of the Visiting Forces Agreement (VFA),” Jose said.

“[The VFA states] that US military authorities shall, upon formal notification to by Philippine authorities, and without delay, make such personnel available to those authorities in time for any investigative or judicial proceedings,” he said.

Pemberton would be risking his case becoming unfavorable to him if he would not appear to provide his statement, Jose said.

“Once the prosecutor files the case and Pemberton does not appear to give his statement, it’s his problem,” he said.

Pemberton may or may not appear at preliminary probe – US embassy