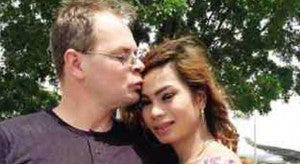 Marc Sueselbeck arrived at the Ninoy Aquino International Airport via Malaysia Airlines flight MH289 past 11.am., a radio report said.

The report added that Sueselbeck would head straight to Olongapo City to visit the wake of Laude. It was said that the transgender will be cremated on Friday, Oct. 24.

Laude was found dead, with her head plunged in a toilet at a motel in Olongapo City last October 11. She was last seen with a male foreigner.

The suspect behind the killing is an American serviceman identified as Private First Class Joseph Scott Pemberton.

Sueselbeck and Laude had been engaged since 2012 and had planned to wed in 2015 in Thailand.