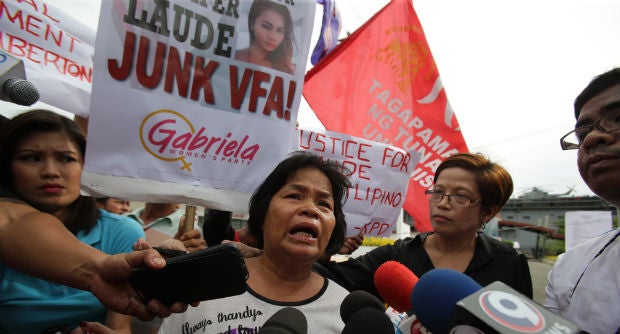 In this Saturday, Oct. 18, 2014 photo, Julita Laude, mother of killed transgender Jennifer Laude, talks to reporters during a rally near the USS Peleliu, where U.S. Marine Pfc. AP

OLONGAPO, Philippines – Inside a funeral parlor, a Filipino mother sits and weeps next to a coffin containing the body of her daughter and demands answers. On a hulking American assault ship moored at a nearby port sits a man who might have them — a U.S. Marine authorities suspect in the brutal slaying at a cheap hotel more than a week ago.

“We don’t eat without praying first. We don’t sleep without saying a prayer. Where were you when this happened?” Julita Laude beseeched God. “She had so many dreams and that killer destroyed them all.”

U.S. authorities are cooperating in the investigation, and have ordered the ship to stay at the Subic Bay Freeport, about 80 kilometers (50 miles) northwest of Manila, until it is completed.

The killing of Jennifer Laude, a 26-year-old transgender Filipino whose former name was Jeffrey, has sparked public anger in the Philippines and revived a debate over the U.S. military presence in a country seen by Washington as a major ally in Southeast Asia. The nations signed a new accord in April that allows greater U.S. military access to Philippine military camps, part of Washington’s pivot back to Asia, where it wants to counter China’s rising might.

Philippine police have identified the suspect as U.S. Marine Pfc. Joseph Scott Pemberton. He was one of thousands of American and Philippine military personnel who took part in joint exercises earlier this month. He and other U.S. personnel were on leave in the city of Olongapo when Laude was found dead.

American investigators have worked with local police, but have not made public any details surrounding the case.

In interviews with The Associated Press, Philippine police and witnesses said that Laude met Pemberton at the Ambyanz, an Olongapo disco bar, in the late hours of Oct. 11.

At one point, they left friends at the bar and checked in at a nearby motel and got a room beside the reception desk.

About 30 minutes later, Pemberton walked out, leaving the door ajar, according to the motel staff.

A housekeeper entered the room to find Laude’s body, partly wrapped in bedsheet, in the bathroom. She had apparently been drowned in the toilet, according to police Chief Inspector Gil Domingo.

Two witnesses — a friend of Laude who was with them at the disco and the motel’s housekeeper — identified Pemberton in a gallery of pictures made available by U.S. military authorities as the Caucasian male seen with the victim at the bar and later at the motel, said Olongapo Mayor

DNA tests were being carried out on two condoms recovered from the bathroom, he said.

A housemate of Laude, who identified herself only as Alexis, said the victim was a devout Catholic. In the house they shared, she pointed to a Christmas tree that Laude had only recently erected. There were photos of Laude wearing a bikini on the wall.

On Friday, Philippine authorities served a subpoena at the U.S. Embassy for Pemberton and four other Marines, who were sought as witnesses, to appear Tuesday before prosecutors in Olongapo in a preliminary investigation. The prosecutors will decide if there is enough evidence for charges to be filed in court.

The U.S. Embassy said Sunday that prosecutors had met with the four witnesses. The embassy said it was up to the suspect whether to appear on Tuesday, depending on the advice of his Philippine lawyers. Under local laws, he could be represented by his lawyers at the initial hearing, but any non-appearance might spark more criticism about the government’s inability to gain custody of him.

“The United States continues to fully cooperate and collaborate with Philippine authorities in all aspects of the case,” the embassy said.

Philippine officials have sought to limit any fallout from Laude’s killing, describing it as an isolated case unrelated to the treaty alliance.

“We are very committed to this relationship,” State Department spokeswoman Marie Harf said Friday in Washington.

Which of the two governments has custody of U.S. military personnel under criminal investigation is a ticklish issue. The Visiting Forces Agreement, which allows U.S. forces to conduct military drills in the Philippines, says that the Philippines can prosecute American service members, but that the U.S. has custody over them “from the commission of the offense until completion of all judicial proceedings.” The Philippine Supreme Court, however, ruled in 2009 that convicted U.S. personnel must serve sentence in Philippine detention.

Left-wing activists and nationalist Filipinos have cited the custody provision as proof that the accord was lopsided in favor of the U.S. and undermines the sovereignty of the Philippines, which was an American colony until 1946. They recall a case of another Marine, Daniel Smith, who was found guilty and sentenced to life in prison on charges of raping a Filipino woman after a night of drinking in 2005, also at the Subic Bay Freeport.

Smith was held at the U.S. Embassy in Manila until a Philippine appeals court overturned his conviction in 2009, allowing him to leave the country and sparking anti-U.S. protests.

Protests, typically small, have again taken place in Manila and Olongapo. Most have been by left-wing activists, who have long called for an end to the U.S. presence in the country, as well as gay, lesbian and transgender groups that have labeled the killing a hate crime.

On Saturday, dozens of activists managed to enter the former U.S. naval base at Subic where the suspect’s ship is moored.

They chanted “U.S. troops out now” in the shadow of the USS Peleliu, and called for the scrapping of the Visiting Forces Agreement.

Paulino, the Olongapo mayor, confronted the protesters, saying his city of 280,000 people welcomed the American troops and backed the accord.

“We won’t agree for the VFA to be junked because it gives us a livelihood,” Paulino told a protest leader, saying visiting American troops filled restaurants and bolstered tourism.

When U.S. troops left Subic and nearby Clark Air Base in the early 1990s, ending nearly a century of American presence in the Philippines, “we went hungry,” Paulino said.

“Who came to help us? No one,” said the mayor, who owns a rent-a-car company and is a beer distributor in Olongapo.

At the funeral parlor, Laude’s best friend, Roann Dollette Labrador, said the victim had spoken about her death before.

“She mentioned that she wanted to die young, when she’s still fresh-looking,” Labrador said.

“And once, she told me that she would like people to get hyped up and talk about her when her time comes.”