California grade school students prepare for ‘The Big One’ 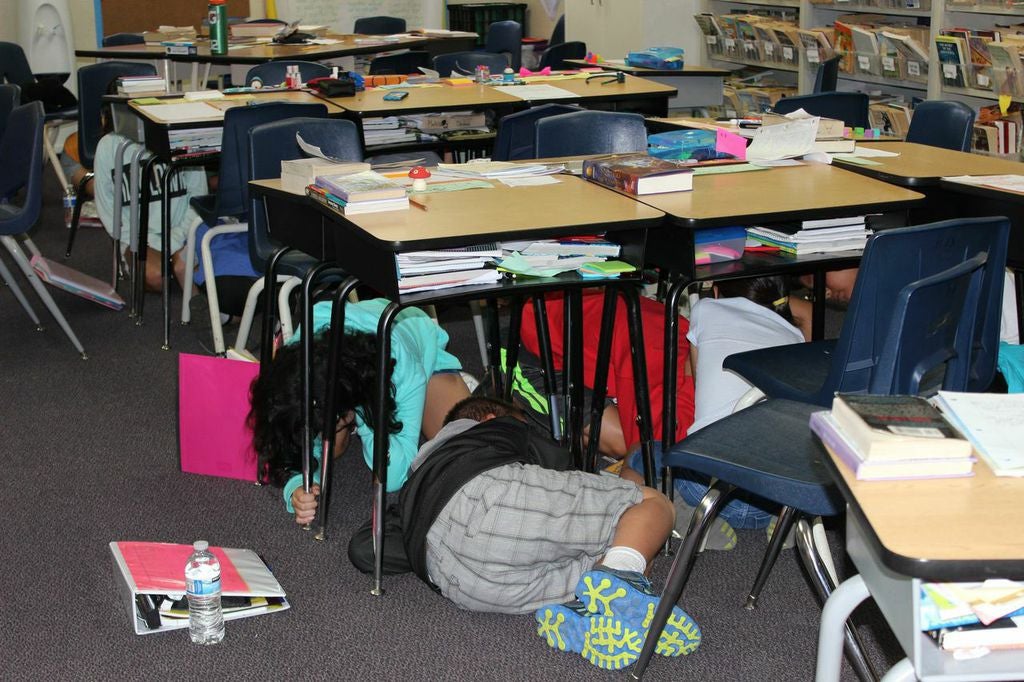 MISSION VIEJO, California — While the earth didn’t actually move October 16, Californians participated in the annual “Great California Shake Out” drill, which is an opportunity for communities to plan how to be safe in the event of an earthquake.

Some 10 million California residents among the 25 million registered participants joined the simulated disaster drill that began in 2008 in California and has since spread to other states and countries.

Mission Viejo’s Bathgate Elementary, which serves more than 700 children ranging from preschool to 5th grade practiced “drop, cover and hold” and then students and teachers evacuated to the school playground and kept calm while the mock drill was ongoing.

Children in the classrooms were instructed that wherever they may be at time of an earthquake – at home, work, school, anywhere – they are to “drop, cover and hold on” and stay in this position for at least 60 seconds.

While many of the children were fortunate enough not to have lived through any large-scale earthquakes or calamities, it doesn’t mean they are completely unaware of what is happening in the world around them.

Eight-year-old Zita Conot, who attends Bathgate as a third grader, has helped her older sister and her mother, Blanca, in Orange County fundraisers for survivors struggling from the effects of natural calamities in the Philippines. 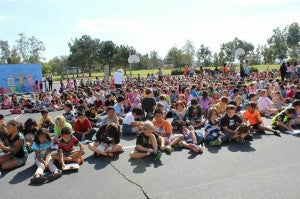 With roots in Ilocos, Blanca saw to it that her daughters did their share in helping their kababayans who were struck by last year’s Tacloban typhoon tragedy. Despite being third generation Filipinos living in California, the Conot family still regularly sends goods back to their Filipino relatives.

The Great California Shake Out served as a wakeup call for families at Bathgate to check their earthquake kits and review scenarios with their children.

It’s been more than 20 years since the last big earthquake in Southern California. In early 1994 the 6.7 magnitude Northridge earthquake killed 57 people, injured 5,000 and caused some $20 billion in damage.

Recently, the US Geological Survey revealed that four segments of the San Andreas fault system in Northern California are loaded with enough tension to produce quakes of magnitude 6.8 or greater

Christine Schrodt told the INQUIRER.net that as a boy scout, her 4th grader Nathan already knows of their family emergency plan in case of an earthquake.

Schrodt, who moved to the US from the Philippines as a youngster said that while her kit needs to replace some batteries, her first aid kit and most of her supplies are up to date.

During the mid-morning earthquake drill, Principal Shelly Kurtz led Bathgate faculty, parent volunteers and all school staff guiding the children to safety “in case an untoward situation were to arise.” 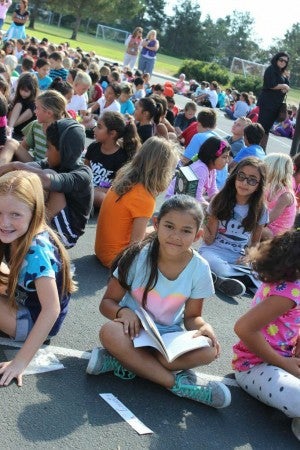 Zita Conot has helped raise funds with her family for calamity victims in the Philippines. PHOTO BY CRISTINA PECZON-RODRIGUEZ

“Overall, it was very good,” Kurtz shared, “We have enough food and water for three days for 800 people. We have all the emergency equipment that we need like if we had to break a door down or things like that. Our first aid supply is updated. We have EZ ups, tarps, enough emergency blankets for 800 kids, glow sticks, lanterns and fresh batteries.”

Kurtz has been Bathgate’s principal for six years, which incidentally is the same year that “The Great California Shake Out started.”

“Every year we do this, it’s a little different,” says Kurtz,” because we don’t know what it would be like when and if it ever happens. It’s really important that we train everyone involved to think on their feet.”

The drill called for an impromptu dry run of how releasing students would work in case of an emergency. School emergency cards for students new to the school this year need to be updated.

The elementary school also needs additional hand-held radios for communication among school personnel, especially when telephone service and basic services could be down in an untoward event. Expiration dates on relief goods and water were checked during the drill as well.

According to the Great California Shake Out, the best way to survive an earthquake is not to start running. Instead, the key is to drop, seek cover under a table and hold on for at least a minute to avoid being thrown or struck by falling debris. Many times, earthquake injuries occur when survivors run over broken glass or fallen objects.

Earthquake kits should have non-perishable food to last each family member three days.

Clean water is essential and each person needs to have at least a gallon of water rationed per person per day. It is advisable to keep an updated emergency kit with flashlights, batteries, hand cranked or solar powered disaster/weather radios, a can opener, sanitation items, as well as clothing and shoes with covered toes.