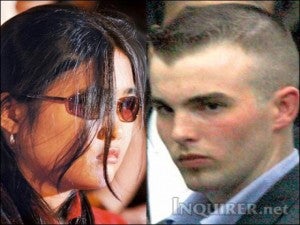 OLONGAPO CITY, Philippines—The memories of the 2005 rape case involving a Filipino woman and an American soldier in the Subic Bay Freeport are again haunting this city as the family of transgender Filipino Jeffrey “Jennifer” Laude, who was allegedly killed by another American soldier, presses the Philippine government for justice.

Marieta Balanan, 63, a fish vendor, said she could not help remembering what happened to the Filipino rape victim, identified in news reports as “Nicole,” almost nine years ago as she hoped that Laude’s family would press the case against the suspect, identified by the police as Pvt. 1st Class Joseph Scott Pemberton of the US Marine Corps.

“We should not let Americans do this to us. The suspect should be jailed here so this will not happen again,” Balanan, who sells fish in front of the Justice Hall in Olongapo, told the Inquirer on Tuesday.

Nicole was vacationing at Subic Bay Freeport on Nov. 1, 2005, and went to a bar where she met Lance Cpl. Daniel Smith and a group of American soldiers.

Nicole alleged that Smith raped her in a van driven by a Filipino employed by a contractor of the US military.

A 2010 Inquirer report said the case of Nicole raised issues on whether Philippine courts had jurisdiction over the case and custody of Smith under the 1999 Visiting Forces Agreement (VFA).

In April 2009, the Court of Appeals reversed the 2007 decision of the Makati City Regional Trial Court and acquitted Smith.

A month before the appellate court handed down its decision, Nicole recanted her testimony that she was raped by Smith.

She left the country for the United States shortly after the decision.

Smith was detained at the US Embassy in Manila for the duration of the trial and the review of his case due to a provision in the VFA that allows the US government to retain custody of American servicemen who have pending cases in the Philippines.

Killer must be punished

Delia Lingat, 43, also a vendor in this city, said the suspect in Laude’s murder must be punished at all cost.

Although the behavior of American soldiers visiting the Philippines should not be generalized, still they “must behave” when they are here, Lingat said.

“I don’t hate the Americans but they should learn to respect Filipinos,” she said.

Like Balanan, Lingat hoped that justice would be served and that Laude’s family would fight to the end.

Carmen O’Brian, whose husband is a US serviceman, said Laude’s killer must be held liable.

“Regardless of the citizenship of the suspect, justice must be served. The criminal must be imprisoned in the country,” O’Brian said.

Bruce Flummer, legal researcher at the Regional Trial Court Branch 73 in Olongapo, said what happened to Laude was similar to the case of Nicole in many ways.

Flummer said the charges against the four Marines who were implicated in Nicole’s rape case were first filed in RTC Branch 73, which is a family court.

“Somehow we are reliving the memories of the Nicole rape case, only this time the victim has died,” Flummer said, adding that he wanted Laude’s family to press charges.

Members of the lesbian, gay, bisexual and transgender (LGBT) group Kapederasyon met with Laude’s family on Wednesday and offered their help in pursuing the case against Pemberton.

“Jennifer’s death should make the branches of government become more open to cases involving transgender individuals and other members of LGBT,” the group’s spokesperson Allan Toliosa, said at a press conference.