Independent observers believe the closest and most expensive statewide race in California this November is for the post of state school superintendent. It pits two Democrats, the top winners in the June primary, against each other. One is a former high school science teacher, incumbent State Schools Superintendent Tom Torlakson, and the other is Marshall Tuck., a former Wall Street investment banker.

Money is the chief reason for the closeness of the race. In a recent email to his supporters, Supt. Torlakson revealed that “school privatizers and anti-pension forces” have just poured in an additional $4.7 million to support his opponent.

But what Torlakson lacks in money, he makes up for in the number of powerful Pinays working actively in his campaign. First and foremost is his wife, Mae Cendana Torlakson, a graduate of the University of the Philippines (UP). She has enlisted the help of her daughter, Tallulah, a former co-host of TFC’s Speak Out, and her son, Yves, both University of California Berkeley graduates. 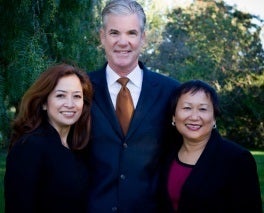 And then behind the scenes is Torlakson’s chief of staff for 29 years, Gloria Ramil Omania.  Although Gloria retired in 2010, she is still actively involved in Torlakson’s campaign.

Mae Torlakson is also an elected public official, serving her second term on the Ambrose Recreation and Park District Board in Contra Costa County where she is currently the Chair and running for reelection this November. She is also the President of the Bay Point Garden Club and Chair of the Friends of the Delta Trail.

Mae and her husband share a common passion for education. Mae works as a program coordinator for the University of California Office of the President for the MESA (Mathematics, Engineering, Science Achievement) program,  a job that connects well to her husband’s expressed priority to enhance STEM (science, technology, engineering, mathematics) education in California schools.

They are also partners in helping expand park and recreation access in their communities. Working with her fellow Ambrose Recreation and Park District board directors and supporters in the area, Mae has helped obtain millions of dollars in funds from the county, the state, East Bay Regional Park District, and the City of Pittsburg to expand services to the people of the district. The Ambrose District was also able to quadruple its reserves and increase its class offerings.

“We also renovated our community and teen center and opened a community garden,” Mae says proudly.

Gloria Ramil Omania was hired by Torlakson as his chief of staff when he was first elected to the Contra Costa County Board of Supervisors in 1981, the first Pinay (and first minority) to serve in such a capacity in Contra Costa County.

Gloria continued with Torlakson when he was elected to the State Assembly in 1996, becoming the first Pinay to serve as chief of staff for a California State Legislator.

Torlakson described why Omania had been his top aide for all those years: “Gloria has been a true leader, an inspiration, and my chief partner in my public service career since the day she began working in my office 29 years ago. She is my top trusted advisor and has helped to shape major policy issues impacting our community and California. Gloria has helped so many people resolve problems they have had in the communities I’ve served. She is a great manager—extremely organized, hardworking, dedicated, and loyal.”

For her part, Omania explained why she loves working with Torlakson. “Working with Tom, I have had the good fortune to have a position that allows me to empower others. I just happened to luck out and find a good job that became a better job, and grew into an incredible career because my boss is all about creating opportunities.”

Mae and Gloria undoubtedly influenced Torlakson as an Assemblyman and State Senator to author and support legislation to recognize the valuable contributions of the Asian Pacific Islander (API) community. He has been “steadfast” in his support for the Filipino Veterans Equity Act to provide long overdue benefits to Filipino veterans. Tom also co-authored legislation to include the role of Filipino Americans in World War II in the high school social studies curriculum, as well as the resolution to declare October as Filipino Heritage Month.

“I believe in this time of crisis for our educational system that our education leader must use the platform a statewide office provides to highlight the problems—and their potential solutions. That’s why I have brought together the largest and most diverse group of supporters of any statewide candidate this year. I know from my personal experience and direct conversations how important our educational system is to members of the API community—and how concerned its members are about the dramatic impact of the recent large funding cuts to our schools,” Torlakson said. 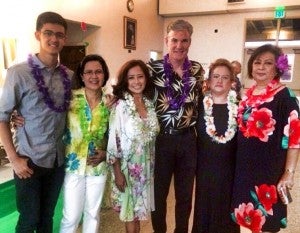 In an interview with Lisa Leff of Associated Press in May this, Torlakson said that in his second term, he would “prioritize additional funding for implementing Common Core, ensure an effective transition to the new school funding formula that directs more money to schools with the most disadvantaged students, and continue championing programs that meld academics with career preparation.”

As Leff noted in her article “Race For California School Chief A Referendum On Change”,Torlakson “touts his productive relationships with the unions, with Gov. Jerry Brown, with the Brown-appointed state Board of Education and with former colleagues in the Legislature, where he served for 14 years. All played a role in securing passage of Proposition 30, the temporary tax increases that helped restore school funding cuts made during the recession,” he  informed Leff.

“I’m a great advocate for kids. People believe me, they trust me because I’m a teacher, and as a coach I know all about creating teams,” he said. “So I have the experience, we are living up to all of the promises we made when I ran and more, and we are continuing the momentum, ” Torlakson added in the Leff interview.

Tuck recently bought a full page back page ad in the San Francisco Chronicle, the only political candidate to purchase an ad in a San Francisco daily this year, an example of the big bucks behind his campaign.

But Tuck doesn’t have Pinays beneath his wings. Hopefully, that will be enough to spell the difference for Torlakson.