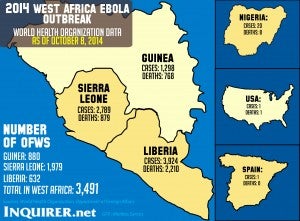 MANILA, Philippines—Despite growing global concern over the continued spread of the dreaded Ebola virus from three West African countries, why is the Department of Foreign Affairs (DFA) not yet repatriating the almost 3,500 Filipinos there?

Here are the four main reasons why the DFA has not yet imposed mandatory repatriation under Crisis Alert Level 4 in the countries of Guinea, Sierra Leone, and Liberia, all of which are still under Alert Level 2, (precautionary measures and deployment ban on new hires).

Ebola virus is transferred through direct physical contact of bodily fluids, such as blood, urine, vomit, semen, saliva, etc., from someone who is infected. This is the reason why some doctors and health workers are also becoming infected.

Filipinos in Guinea, Liberia, and Sierra Leone are mostly professionals working in offices who have little exposure to Ebola patients.

“I think that for our nationals there, the risks of being infected are very low because the nature of their work there, they are not directly exposed to the patients infected by Ebola, because they are not into medical services neither are they healthcare workers,” Jose said.

More than 8,000 worldwide have been recorded to have contracted Ebola and nearly half have died. Recent cases have been reported in the United States and Spain.

When the DFA first raised the possibility of raising Crisis Alert Level 4 around the end of August, many OFWs have expressed their intent to stay even if mandatory evacuation was implemented.

“The message they brought is they want to stay. They don’t want the alert level raised. They think the risk is very low for them to be infected, and if we will raise the alert level, it will be difficult for them because they can lose their jobs,” Jose said.

The Department of Health has previously said that it will not implement special screening procedures at airports for OFWs coming back from the West African countries.

“Before the Filipinos leave the foreign countries, their condition has already been monitored there, thus they are already filtered when arriving in the country,” Lyndon Lee Suy, the program manager of Emerging and Re-emerging Infectious Diseases, National Center for Disease Prevention and Control of the DOH, previously said.

“Whether there is an Ebola [outbreak] or none, the same [screening] procedures will apply [at the airport,]” he said.

The Philippine Overseas Employment Administration (POEA) has  issued guidelines for Filipino seafarers telling them not to disembark from their ship when at the ports of Guinea, Liberia, or Sierra Leone.

“There will be no shore leave for seafarers and no crew change in the ports of these countries in the meantime,” POEA administrator Hans Leo Cacdac said in a statement after the agency issued guidelines for seafarers and ship manning firms last August 11, 2014.

The Department of Labor and Employment (DOLE) said the guidelines will be an added layer of security for the Filipino seafarers on ships all over the world.

“The guidelines are issued for our seafarers’ welfare and protection. They could be vulnerable to the EVD due to the unavoidable circumstance where they have to interact with shore-based personnel who come on board ships to perform their respective duties,” Labor Secretary Rosalinda Dimapilis-Baldoz said in the statement.

With the EVD cases outside of West Africa, recently in Spain and the United States, the DFA said that the Philippine embassies and consulates are actively providing information for OFWs about EVD.

“Our embassy in Spain has already issued an advisory for our Filipino nationals in the country, advising them and giving them more information about EVD, its nature, its symptoms, the method of transmission, and how to take care of themselves,” Jose said.