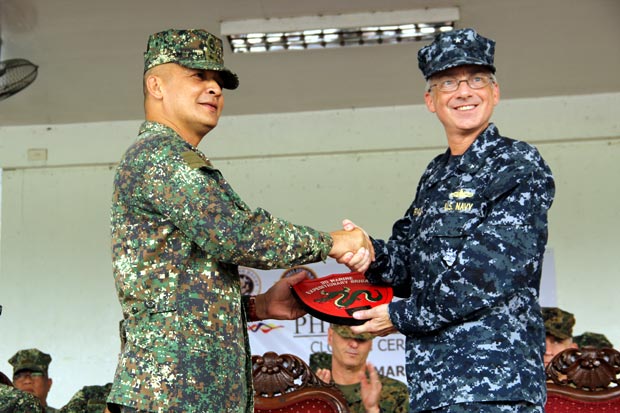 “Through these bilateral exercises our troops became more competent and capable in the conduct of amphibious operations, special operations, combined arms and such other operations relative to territorial defense,” said Major General Romeo Tanalgo, commandant of the Philippine Marine Corps, at the closing ceremonies of Amphibious Landing Exercises (Phiblex) on Friday.

“Phiblex 15 comes on the heels of escalating tension in the West Philippine Sea (South China Sea) and the current Iraqi crisis in the Middle East. Both developments have profound implications for the Philippines and the US,” he added.

About 5,000 Filipino and American troops participated in the 11-day annual exercise that started September 29 in the province of Palawan, which is near the West Philippine Sea. It was also held in Subic Bay, Zambales, Clark Air Base in Pampanga, Marine Base in Cavite and Crow Valley, Tarlac.

The Philippines is currently embroiled in territorial disputes with China over the potentially resource-rich West Philippine Sea, which is also being claimed by four other countries.

Tanalgo said “the tensions in West Philippine Sea as a result of the excessive and expansive maritime and territorial claims have been aggravated by aggressive patterns of behavior of other claimant states and continue to pose a threat towards maintaining the peace and stability in the region.”

“In the areas of maritime security, maritime cooperation and situational awareness, it will also broaden our capabilities for humanitarian assistance and disaster response by allowing our militaries to respond more rapidly during emergencies and calamities like the recent Super Typhoon Yolanda (Haiyan),” Tanalgo said.