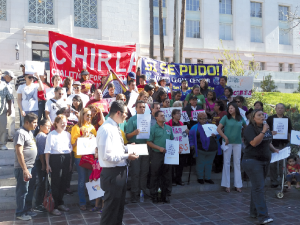 LOS ANGELES – Very few Filipinos are showing interest in a new law that would provide a driver’s license to all Californians regardless of immigration status, even as advocacy groups and community leaders on October 3 celebrated at the steps of City Hall the one-year anniversary signing of AB 60’s signing.

The Coalition for Humane Immigrant Rights of Los Angeles (CHIRLA) called it a “victory,” saying that it will benefit California’s economy and make the roads safer. With the new law taking effect January 1, 2015, CHIRLA estimates that approximately more than one million people could potentially apply for a driver’s license.

However, in spite of the high number of projected beneficiaries of the law, it seems that only a few Filipinos are interested in the landmark service for the undocumented.

Joe Bernardo, a Filipino-American policy analyst for the Mayor’s Office of Immigrant Affairs, lamented that only a handful of Filipinos have shown up at the recent driver’s license educational forums organized by the city. Bernardo, who coordinates most of the forums, said only one Filipino family showed up to both of their recent outreach events in Van Nuys and Canoga Park.

“We try to reach out to the Filipino community, but only one family showed up,” Bernardo said.

Most of the people who attend the forums to learn more about the driver’s license are from the Latino community, Bernardo observed.
Just like DACA

Bernardo compared the low turnout for the undocumented driver’s license forums to the Deferred Action applications among Filipino youths. According to community groups, fewer than 20 percent of the eligible Filipino youths apply for DACA.

Bernardo said that this could be caused by a prevalent stigma in the Filipino community regarding undocumented immigrants. “People are scared. But I think people need to be more brave, and know that LA is a sanctuary for them,” Bernardo stated.

He pointed out that in Los Angeles, the immigrant community can enjoy a lot of rights that may not be available to them in other places. “I think that Filipinos should take full advantage of all the rights they have, whether they’re undocumented or not here in the US,” he said.

Bernardo, who admitted that he also has relatives and friends who are undocumented, said that he understands why a lot of people who are “out of status” are scared to come out into the open.

However, he pointed out that in the last few years, Los Angeles has enacted progressive measures that allow the city to become more inclusive of all people, regardless of whether they have papers or not. There should be little to no reasons now for undocumented Filipinos to be afraid to come out, he said.

As far as the license itself is concerned, immigrant rights advocate Anthony Ng said that there are protective measures in place that will help prevent the license holder’s security from being compromised.

For example, the approved design for the license will very closely resemble a regular California driver’s license, save for a small marking on the side that would indicate federal limitations. The new design does not disclose the immigration status of a license holder.

Furthermore, the State of California has begun training its highway patrol officers and law enforcement agents on how to properly interact with people who hold this kind of license. Ng also pointed out that in relation to AB 60, additional legislation was passed to ensure confidentiality of the license holders’ information.
Culturally competent outreach

Ng, who works for Asian Americans Advancing Justice – LA, said that the low turnout could be mainly due to the Filipino community being “hard to reach.”

Ng, a Filipino DACA recipient himself, emphasized the need for culturally competent communication, in terms of the outreach efforts to ethnic groups. He said that ethnic media play a huge role in dispelling misconceptions surrounding new services for the undocumented community.

Ng also pointed out that the culturally competent outreach on AB 60, whether it’s through ethnic media or through community groups, would also help prevent immigrants from becoming victims of fraud.

According to community leaders, applicants should be wary of fraudulent offers, including those that promise to expedite the process or replace required documents with other documentation.

“[We’re] making sure that they don’t become victims of fraud. The only place that you can pay is the DMV. No one else is processing it other than the DMV,” Ng said.

Ng said that Filipinos who want to apply for the license should not hesitate to seek for help from trusted community partners, like Advancing Justice – LA. The community partners, he explained, are more than willing to help immigrants prepare their documents for the application process and provide in-language assistance to those who need it.